With Nuclear Triad Established, India needs to cement it further 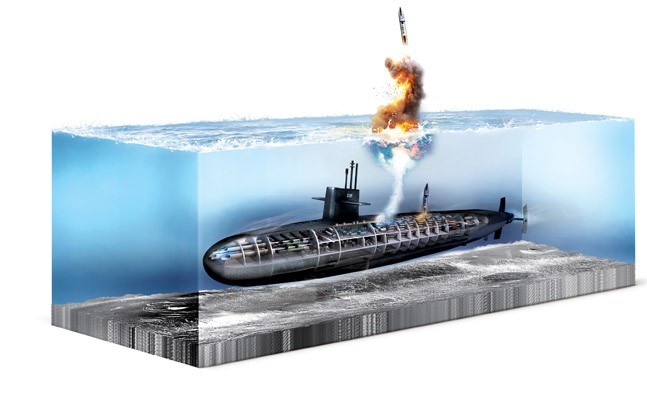 Completion of INS Arihant’s first Fully combat Deterrence Patrol comes as a major boost to India’s Nuclear planners and establishes country’s Nuclear Triad in place for the time being where India can claim that a Nuclear weapon can be delivered from Land, Air, and Sea wherever required.

The last leg which was the Nuclear delivery system from the Sea of the nuclear triad was the most difficult and also most challenging because of the launch platform and underwater firing long-range missiles which had to be developed, perfected and tested several times to make them reliable before it was ready for deterrence patrol in the high seas.

Unlike Land and Air launch mechanisms of India, only Sea-based platforms always carry an Active Nuclear weapon on each deterrence patrol which means at least one submarine has to be on deterrence patrol no matter what is the actual threat levels is in the country for a war.

INS Arighat which is the second Arihant-class submarine is currently going through series of harbor and sea trials is a more vital component of the nuclear triad then the INS Arihant due to advancements in technology and also due to increased reliability of the on-board system which have been perfected over the year due to Arihant experience.

Unlike aircraft, No Nuclear Submarines are exact copies of its predecessors even if they are from the same class of design and INS Arighat is a much more stable product which Indian Navy like to gets its hand on to further cement the country’s nuclear triad.

The second phase of Sea-based Nuclear force will actually come when submarines code-named S4 and S4 ‘star’ which are an enlarged variant of an Arihant-class submarine with 1000 tonnes more displacement along with twice the Arihant’s missile load will hit sea trials from 2020 on wards.

This four ballistic missile submarine is what will actually complete India’s nuclear triad Operationally due to the availability of at least two submarines which can be on deterrence patrol all the time while the other two are on the port for minor repairs or crew shift change.

INS Arihant getting combat ready and conducting its first patrol in high seas is just the beginning of country’s Nuclear Triad, we are still a long way from actually establishing a complex fail-safe Nuclear Triad from the Sea yet, but we will get there by the turn of a decade and will need to continue to push the envelope so that we arrive on time.