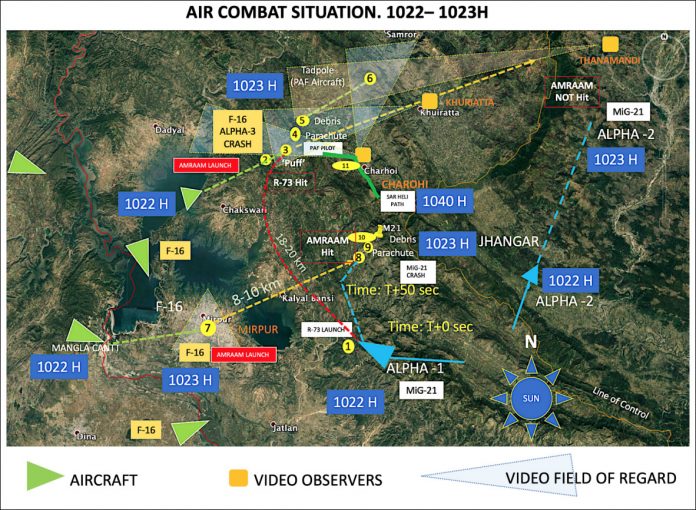 With more and more information ticking after the famous Air battle of Mig-21 vs F-16. News coming from official sources indicates that India might have lost Two Mig-21s that day had not Wing Commander Abhinandan Varthaman had aggressively maneuvered in line of fire by three F-16s who were carrying out classic NATO hot-cold radar lock sequence over the Nowshera sector trying to take down lone Su-30MKI flying over 14-15000 feet which was trying to protect a vital military installations.

Three F-16s were positioned and Two Mig-21Bis which were fast approaching for interception of this jets were already in AMRAAMs No Escape Zone (NEZ) when Both pilots were ordered to fall back by Squadron leader Minty Agarwal who was fighter control at the operation room. Abhinandan knew that both he and his wingman “Alpha-2” were in NEZ and with Radar lock warning light already lighten up in both the aircraft they had to shoot or get shot down that’s when Abhinandan decided to overfly his “Alpha-2” and go after F-16B “Alpha-3” which was positioned on his right, which by that time had already fired an AMRAAM after Mig-21 Alpha-2” made a right turn to return.

AMRAAM missed Mig-21 ” Alpha-2” by a close margin as per the latest report and aggressive maneuvering caught the attention of the Second F-16 in the vicinity but before he could act, Abhinandan’s R-73 CCM had got a missile lock on a heat signature which was that of F-16B “Alpha-3” which had just fired an AMRAAM at his “Alpha-2”. F-16B “Alpha-3” is the plane which was shot down by Mig-21 ” Alpha-1” flown by Abhinandan but before he could turn and make a run for Indian side of LOC after entering 7km inside POK he was shot down by another F-16 with an AMRAAM just 58 seconds apart.

Latest revelations show that AMRAAM had missed its target even when the aircraft was in its NEZ in close-quarter combat and chances of it hitting Su-30 over 110km is completely bogus as claimed by Pakistan. Total number of AMRAAMs fired that day stands at 7 , One each at Mig-21 ” Alpha-1” and ” Alpha-2” and 5 at Sukhoi-30MKI, which single handily tanked much-celebrated high kill ratio of the famous AMRAAMs.