Girish Deodhare, chief of the Aeronautical Development Agency (ADA) while speaking to Business Standard has confirmed that India’s most ambitious fighter program Advanced Medium Combat Aircraft (AMCA) is on track and the first aircraft will be ready for its first flight in 2025 after being under design stage for last 8 years.

AMCA scaled model showcased over the years will be getting radical changes to the design since now ADA has decided to incorporate Diverterless supersonic intake (DSI) and a full-scale model (1:1) of AMCA is being manufactured by VEM Technologies for stealth measurements will be sent to DRDO’s Orange facility for testing the stealth features.

ADA Chief said that the AUP (all-up weight) of the AMCA will be 18.5 tonnes (including Internal fuel ) and in stealth mode, it will have the capability to carry 1.5 tonnes of Internal weapons in four hard points and Non-Stealth mode, it can carry 6.5 tonnes of Total weapons or fuel in both Internal and its External bay. 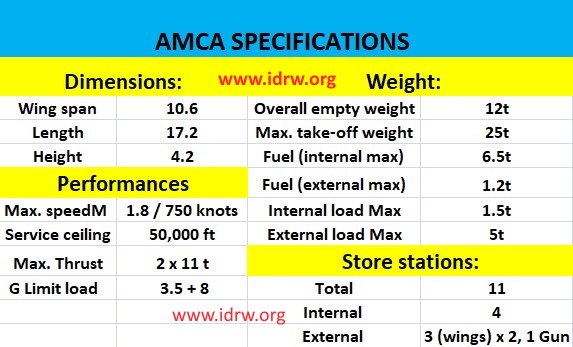 As per full-scale engineering development (FSED) plans for AMCA, there will be 5 Prototypes which will be used extensively for developmental trials and IAF has agreed to accept around 36 jets in Mark-1 configuration which will come in IOC Configuration powered by two General Electric (GE) F-414 engines and will hit production from 2029-30 onwards, Mark-2 will come with FOC configuration along with Two 110 KiloNewtons (KN) engines incorporating thrust vectoring (TVC) nozzles.