In capital procurements, first we give RFI (Request for information) to various vendors. After this our air staff quality requirements and  INITIAL ESTIMATES (roughly called budget figure around which we can spend)is floated the form of RFP (request for proposal)

Now, various firms respond to us with their products which meet the requirements and budget (INITIAL ESTIMATES). We carry out technical evaluations of products offered to us and commercial evaluations of firms. Now we select products and respective firms (normally more than 1 to pressurize vendors on prices and other offers) which fits our technical requirements and then carry out commercial (price) negotiations to select the most financially viable(lowest bidder) product and then make FINAL ESTIMATES (total contract cost) (considering after sales services, infrastructure, training and add on required with that particular product) to sign the contract.

MOD issued tender (RFP) in 2007 for 126 aircrafts (18 buy & 108 make) with the INITIAL ESTIMATES (rough budget) of $ 10.2 billion at 2007 exchange rate. It is to be noted that this initial estimates$10.2 contains the cost of 18 fly away aircrafts and the cost of parts of 108 aircrafts which were to be assembled at HAL. This $ 10.2 billions does not contains the cost of assembling the parts or kits at HAL (as aircraft to be assembled was not known) leave alone weapons add on which are different for different aircrafts/ platforms

After evaluations between 2008-11 during UPA 2 IAF & MOD selected Rafale of Dessault& Typhoon of Eurofighter (group of European firms). In commercial negotiations the Rafale of Dessault comes out to be lowest bidder.

Now while making FINAL ESTIMATES, HAL and Dessault could not agree on the price, quality and delivery timelines guarantees of 108 planes to be built by HAL(HAL asking for 2.8 times man hours required by Dessault for making 1 rafale hence raising costs(by 150crores per plane) and MOD wanted the Dessault to take quality guarantees of 108 planes to be built by HAL so that it doesn’t go through the reliability issues similar to MIG 21 and SU 30 (SU 30 issues are not in public because it has twin engine and makes emergency landings on 1 engine in case engine failure(quite comman with HAL made engines until recently) hence avoid crashes and media publicity) to which Dessault refused citing it impractical as it doesn’t have control over HAL management & its employees). HENCE, negotiations fall apart and NO

FINAL ESTIMATES COULD BE MADE AND NO CONTRACT WAS SIGNED.

In 2014 Modi came to power and instead of refloating the tender he started renegotiating for rafale(to save time) as it was already selected by IAF with French govt instead of Dessault. Hence in 2016 FINAL ESTIMATES were made for Rafales with FRANCE INSTEAD OF DESSAULT as Modi sought French govt support for various serious policy projects (Kaveri engine, changes in Rafale for nuclear delivery role (rumored), etc).

Also it was observed that once we acquire a platform and then go for weapon purchases, training and maintenance, the vendor significantly jack up the prices for all these things as the OEM knows that we are now completely dependent on them and we have nowhere to go. Latest example of this is P8I platform where the India has to pay $ 300+ millions for 1 simulator along with maintenance contract in 2018 while 4 follow on purchase P8I has cost us $ 1 billion. So NDA decided to make complete purchase of aircraft, associated equipment in a single contract instead of going for separate contract for separate for separate things.

Hence FINAL ESTIMATES of €7.87 billion were made for 36 Rafale(buy only)+2 simulators+ weapons+meteor and scalp missiles+training of crews+ infrastructure on 2 bases + guarantees for availability (servicibility) of 75% planes any time(performance based  logistics)+ maintenance tools+ weapon storage facility in france for 6 months+integration of weapons of Russian, Isreally and Indian origin+free spares for 5 to 7 years+ inflation < 3.5% which was fixed 3.9% in UPA tender+50% offset+pilot mission kits+ India centric modifications etc.

While responding to RFP of 2007, Dessault quoted € 79.8 millions per aircraft for 18 fly away planes at 2007 exhange prices in its commercial bid. But in tendering commercial bids are not opened until the product qualifies technically. So an escalation (inflation) clause of fixed 3.9% per annum was added which were to be applied on the base quote price.

Now opposition is claiming 522/526/540/700 crores by taking the base quote price of 2007-08 of €79.8 million without escalation of 3.9% and converting it into rupees by taking conversion rate of different dates which suites them. 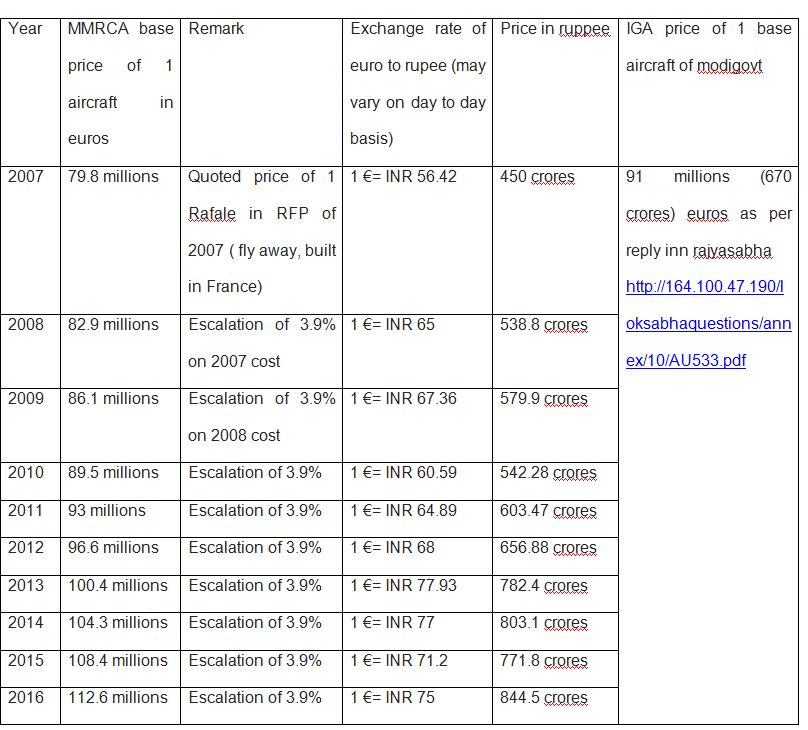 However the funny part is this that the opposition is not applying the escalation clause of 3.9%  on base quote price of 2007.

The IGA (FINAL ESTIMATES) for 36 Rafale(buy only)+2 simulators+ weapons+meteor and scalp missiles+training of crews+infrastructure on 2 bases + guarantees for availability (servicibility) of 75 % planes any time(performance based  logistics)+ maintenance tools+ weapon storage facility in france for 6 months+integration of weopons of Russian, Isreally and Indian origin+free spares for 5 to 7 years+ inflation < 3.5% which was fixed 3.9% in UPA tender+50% offset+pilot mission kits+ India centric modifications was signed on September 2016 for €7.87 billions

A= COST OF 1 BASE AIRCRAFT

B= COST OF 2 SIMULATORS

C= COST OF WEAPONS AND MISSILES

D= COST OF INFRASTRUCTURE ON 2 BASES

E= COST OF SPARES, MAINTENANCE AND PERFORMANCE BASED LOGISTICS

G= COST OF INTEGRATION OF RUSSIAN AND INDIAN WEAPONS

H= COST OF TRAINING AIRCREW AND OTHER miscellaneous cost

So per aircraft cost according to opposition = = 1640 crores per aircraft However the funny part is, opposition is hiding that this contract cost of 59025 crores contains 2 simulators, weapons, missiles, training, infrastructure apart from 36 rafales.

HENCE WE ARE COMPARING THE INITIAL QUOTE (rough figure) OF THE 1 Rafale  €79.8 millions of 2007 exchange rate without applying the 3.9% escalation (NO CONTRACT SIGNED) WITH THE FINAL ESTIMATES (exact figure) OF IGA contract (inter govt agreement signed) 7.87 billions euro of 2016 exchange rate(36 Rafale+2 simulators+ weapons+meteor and scalp missiles+training of crews+ infrastructure on 2 bases+ guarantees for availability (servicibility) of 75% planes any time(performance based  logistics)+maintainence tools+ weapon storage facility in france for 6 months+integration of weopons of russian, isreally and  indianorigin+free spares for 5 to 7 years+ inflation < 3.5% which was fixed 3.9% in UPA tender+50% offset+pilots mission kits) WHICH IS IMPRACTICAL.

It is equivalent to comparing the cost of a body of a pen in 2007 prices with the cost of the same pen along with refill in it + maintenance among other things in 2016 prices.

As per reply ofminister of state for defense Dr. SubhashBhambre reply in Loksabha against unstarred question number 533 on 18 November 2016 in which he said that per aircraft cost of Rafale is approximately 670 crores.

Viewers can get this document by going to Loksabhawebsite?Questions?page 3188?question 533?subjest (Fighter aircraft of IAF).

Converting above figure in euro at the conversion rate of September 2016 takes cost of each aircraft to around € 91 millions.

Even the Supreme Court has undergone the pricing details of IGA and MMRCA and is fully satisfied with it as can be seen in Supreme Court Judgment in page 20 para 24. 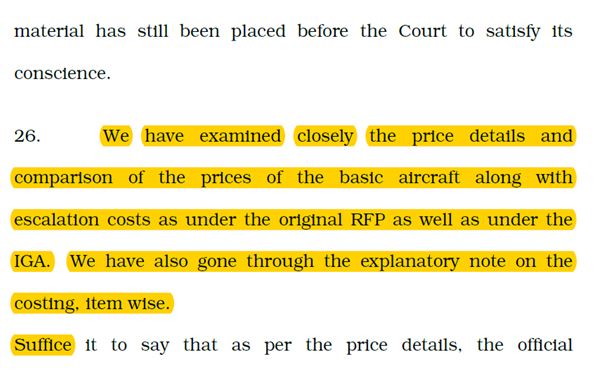 Difference between Rafale of congress and Modi government

By this development, the range of Scalp/ storm shadow air launched cruise missile purchased as part of IGA would become their true range of approx. 550-600km as compared to less than 300km if they were part of negotiatiions of 2011-12. A downgraded version of the scalp missile is exported to Qatar as part of the 24 Rafales purchased by it for € 6.3 billions, making € 9.45 billions by opposition logic for 36 Rafales, making it much costlier than € 7.87 billions for 36 Rafales of IAF that too improved version of French planes.

The most teething problem with this is that both India and especially France can’t acknowledge it, because France is a signatory of NPT (nuclear nonproliferation treaty) which restrict its signatory members, France in this case to help or transfer nuclear technology, material and means of delivery of nuclear weapons(nuclear capable Rafale in this case). So it will be very embarrassing for both France and India if world start saying that France gave India a means of delivery of nuclear weapons. This excuse will also strengthen the argument of China for blocking of NSG membership of India on grounds of Nuclear Proliferation. This part can be verified in the NPT document and website:

It should also be observed that bitten by the servicibility of SU 30s, IAF for the first time signed for the performance based logistics, whose cost is also involved in the IGA.

Keeping aside the other observations, it is cleared from the points 1, 2 and 3 that the Rafales of 2012 negotiations and 2016 IGA have very different configuration and capability but much of it can’t be disclosed in public, especially point 3.

Recently air marshal SBP Sinha has said that the total offset amount is not 30000 crores but 50% of the total contract cost – cost of spares, maintenance, training, enhancements etc which will come way below the shouted 30 thousand crores

Regarding Reliance and Dessault 51:49 joint venture, the limit of FDI(foreign direct investment) in automatic route (without governmentinterference/permission) is 49% hence Dessault has formed joint venture with 72 Indian firms that include L&T, Godrej, Samtel, HAL, BEL, along with Reliance without any interference of govt. Infact there is no communication between Modigovt and Dessaultregarding offsets as of now as the deal is between INDIA AND FRANCE. India has sought 50% offset with France NOT with Dessault or Safranetc, hence it is responsibility of France to execute 50% offset. Similar to Dessault, Safran(makes engine), Thales(makes avionics) and MBDA(makes missiles and weapons) has also formed a number of joint ventures with a number of Indian companies to execute their part of offsets.

Infact it is also a pure lie the Reliance has got contract of all 50%offsets as Dessault share of offsets is about 24-25% of the total offsets and rest 75-76% is shared by Safran, Thales and MDBA as recently reported in media.

Dessault has full authority to decide the Indian offset partner(IOP) out of 72 JVs that it has formed through which, it will execute the contract. It can execute it using one of them, using two of them, using all 72 of them or entirely through Reliance. In the last case, if all the offsets of Dessault are executed through Reliance then in worst case, their JV with reliance will get a miximum of about 7500 crores of offsets work. It should also be noted that Dessault JVs in India including with Reliance will start with making the simple parts of a civilian jet of Dessault called Falcon and not any fighter plane as claimed by opposition.

Similar joint ventures and offset contracts with private companies were made during 2009-10 of UPA 2 also, like Tata+Sikorsky and Tata+Lockheed Martin for aerostructures of S 92 helicopters and C 130Js aircraft and they had zero experience till then in 2009-10.

It is to be noted that the offset period for Rafale starts around October 2019 with the delivery of first Rafale and French companies have to seek offset credits on six months basis, so first date of seeking offset credits will fall in somewhere mid 2020.

From the above discussion, it is clear that by now as on january 2019, Modi government would have not been received even the offset proposal of Dessault, Safran, Thales or MBDA irrespective of the path chosen by them ((a) or (b)). So as of today, there is no question of favoring a particular company let alone awarding of offset contracts on which government has no direct or indirect jurisdiction as of now.