The year 2019 will go down as the most exciting year for the country’s Indigenous fighter jet program, since for the first time, Country showcased two brand new fighters which are under development for Indian Air Force and Indian Navy for the first time shifting focus from Tejas Mk1 and AMCA which have been two fighter programs under production and other under consideration for some years now. ADA showcased a Navy Mark-2 a Carrier based fighter jet and Medium Combat Fighter (MCF) for the Indian Air force.

Both Navy Mark-2 and MCF-Mk2 have emerged as a Fraternal Twins who have differences in appearance but since both were conceived by the same defense laboratory that’s Aeronautical Development Agency and continues to share same DNA of Tejas Mk1 fighter jets when it comes to external similarities, but similarities ends here, because both the programs will cater to different user requirements and will be based on mission specification and operational roles opposite of each other. 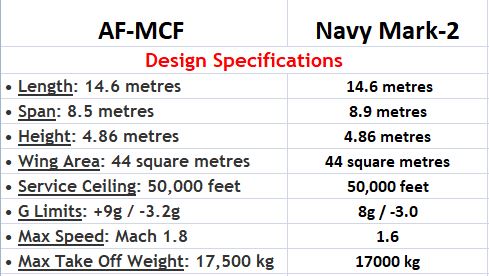 MCF-Mk2 now features a Canards for handling at low speed along with changes to its weapons and fuel load carrying capacity has improved over Tejas Mk1 design. MCF-Mk2 also has design improvement to its cockpit positioning and will feature redesigned air intakes which will shield engines to improve its radar cross-section (RCS). MCF-Mk2 will also have Maximum Takeoff Weight (MTOW) of 17.5 tonnes.

MCF-Mk2 will have re-positioned GSh-23 Gun bay close to its spine on right side behind canards which means it will have 11 hard-points which will allow it to carry weapons payload of 6.5 tons externally. MCF can carry two Close combat Missile ( CCM) on the Wingtip and Two on Pylons, along with 3 BVR Missile along with one Drop tank and One laser designator pod, one smart cruise missile, and one guided drop bomb and one gravity bomb in Mixed Weapons configuration and in Air-Defence Configuration will be able to carry 4 CCM and 4 BVR Missile along with 2 Drop tanks and One laser designator pod.

Navy Mark-2 will sport a simplified undercarriage which will allow it to carry two Beyond Visual Range (BVR) Missiles, in addition to two Close combat Missile in Air-Defence Configuration and two drop tanks and one laser designator pod. Navy Mark-2 will sport only 8 hard-points plus one GSh-23 Gun bay on the right air-intake port. Navy Mark-2 will miss out on Wingtip Pylons but might utilize the use of Dual pylons to shore up its BVR Missile carrying capacity in Mixed Weapons configuration. In Anti-ship Weapons configuration, Navy Mark-2 will carry 3 Anti-ship missiles with two laser bombs, One laser designator pod along with two drop tanks but as seen in aircraft carrier takeoffs can severally hamper an aircraft’s weapons carrying capacity due to environmental factors and each landing is no less than a controlled crash,Navy Mark-2 will always have minimal weapons load of fewer than 5.5 tonnes.