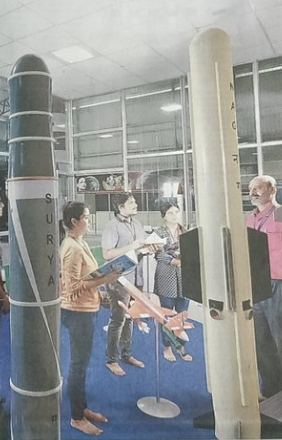 A Twitter user (sarab@sarabpal_singh) has posted an image of a scale model displayed by the DRDO at a local exhibition which could be the first instance of proof of the existence of the 90’s Mythical Surya Intercontinental ballistic missile (ICBM) each with multiple nuclear warheads. CIA in its report on India’s ballistic missile development for the first time had mentioned that India plans to use the lower stage of its PSLV Satttleite launch vehicle to develop an ICBM that will be capable to hit a target over 8000 km in the mid-’90s.

DRDO never confirmed or denied the existence of such ICBM but the Surya ICBM due to media coverage attended mythical status even though over the years Agni missile family created long-range missile which was capable of hitting both target deep in Pakistan and China.

Displayed scale model as seen in the picture, looks like a three-stage rocket, each stage containing a solid-fuel rocket motor. 3rd stage nose fairing shields is where it gets interesting, Surya ICBM of 90’s never could have Multiple Re-Entry Vehicle or MRV configuration so it looks like the scaled model of Surya was that of a submarine-launched ballistic missile (SLBM), where 3rd stage nose fairing was equipped with MIRV platform and third-stage motor.