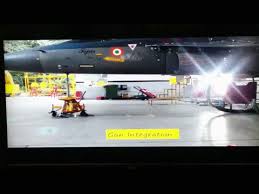 According to a report prepared by the Delhi Defence Review (DDR), Russian Gryazev-Shipunov GSh-23 twin-barreled 23 mm autocannon gun which is locally manufactured by Ordnance Factories Board in India will be going through integration trials onboard LSP-7 LCA-Tejas Mk1 aircraft from early 2020 after gap of 5 years of the first initial ground trials, which were carried out in Nashik in 2015.

DDR reports say that apparently due to lack of ammunition of the gun. trials onboard aircraft was held up which now has been procured by the ADA but other reports had hinted that IAF and ADA had jointly agreed to keep certification of GSh-23 autocannon gun out of the Final Operational Clearance (FOC) phase due to time consuming flight trials which need to be carried out for its certification.

Old idrw.org report that said Gun trials were aborted in 2015 due to other priorities in the program which were much more significant and also due to initial estimation by the ADA and IAF Team that it will require nearly two years for the completion of the Gun trial certification due to trial by error method usually associated with onboard guns certification in all fighter programs.

GSh-23 autocannon gun was introduced to IAF with the induction of second-generation Mig-21 and Mig-23 Interceptor from the early ’70s. It was also found on Mi-24 Hind Gunship Helicopters which has served with Indian Air Force. GSh-23 autocannon gun which is manufactured locally in India by OFB is a reliable weapons system that has proved its mettle over the years and many old technicians of the Gun have been roped in to fix any teething issues with the aircraft which may crop up when the gun trials begin next year.