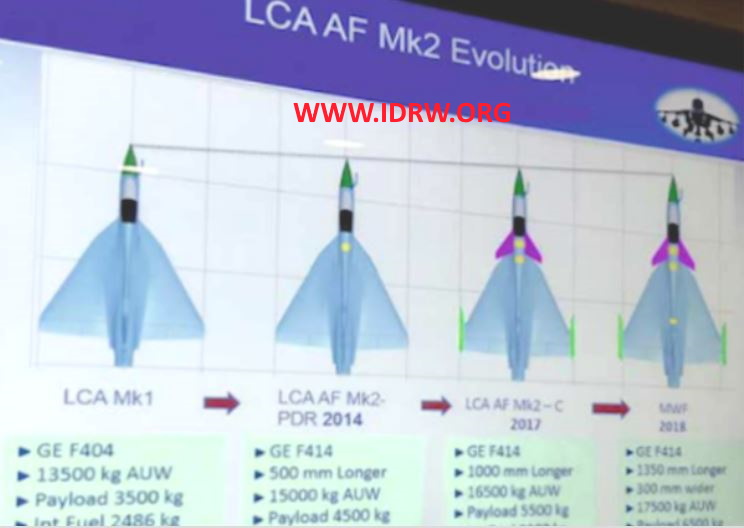 Leaked Internal presentation of Aeronautical Development Agency (ADA) of the LCA-AIR FORCE Mk2 design Evolution shows how LCA-Tejas design has evolved from its early design to the current proposed Medium Weight Fighter (MWF) where it will be replacing the bulk of Medium Category aircraft already in the current fleet of Multi-role fighter aircraft.

MWF-AF will be replacing Mig-29, Mirage-2000 and Jaguar fleet from 2028 onwards starting with Jaguar Strike fighter jet which will start retiring from the force by 2034 completely followed by Mig-29 and Mirage-2000 in the early 2040s.

Present LCA-Mk1/ Mk1A which has confirmed production order of 123 units more or less will stick to the legacy design which was designed in the ’90s. Mk1A will not only be just upgraded Mk1 with better avionics and radar but will be lighter in weight and will have internal changes in the aircraft which will make it much more maintenance-friendly their by reducing its downtime. HAL also has proposed to replace Line Replacement units from the imported ones to the locally developed ones which are much lighter and better than the imported ones.

Mk2 initially proposed by ADA and agreed by IAF in 2014 was Mk1 design with a 500 mm longer fuselage plug which allowed bump of Weight (Maximum takeoff weight (MTOW) from 13500 kg to 15000 kg which also improved upon payload to 4500 kg from 3500 kg and additional internal fuel of 186 kg. LCA-Mk2 was to be powered by the much more powerful GE F414 engine which was the biggest upgrade in the aircraft but Mk2 failed to materialize after HAL proposed the development of Mk1A with better Avionics and upgrades with better performance without a requirement for a major engine change. A major disadvantage of this proposed design was that a more powerful engine and even with increased internal fuel in the aircraft ferry and combat range could have remained the same as Mk1/ Mk1A limiting its role to point interception missions largely.

Mk2-C was the first road map for the development of Medium Weight Fighter (MWF) proposed by ADA in 2017 which had major radical changes in the design. Mk2-C design sported ‘Canards’ for the first time and was 1000 mm longer and had MTOW of 165000 kg and also was 300 mm wider which bumped up its payload to 5500 kg with Internal fuel of 3300 kg. Mk2-C also was first to sport a wingtip pylon configuration and was to be powered by a powerful GE F414 engine. Mk2-C also featured 11 Hard points to accommodate more weapons due to an increase in its payload carrying capability. Mk2-C design border lined near Medium Category Class but further design improvements were sought by IAF along with additional operational improvements which lead to further refinement.

Final configuration of the proposed Medium Weight Fighter (MWF) which was confirmed at Aero India 2019 by ADA earlier this year was further design refinement of the proposed Mk2-C which is now much bigger yet carried same proposed design changes seen in Mk2-C. MWF will be 350 mm longer than Mk2-C and stands at 1350 mm now and will have 1000 kg additional payload which translates into MTOW of 175000 kg. Internal fuel of 3300 kg remains the same which suggests that IAF was ok to lose some ferry and combat range for the aircraft which likely will be supplemented with drop tanks or by reducing drag. MWF will feature 11 Hard-points to accommodate more weapons due to an increase in its payload carrying capability.

Conclusion: As seen above, The LCA-Mk1/ Mk1A and MWF-AF still share many design characteristics, including avionics, ejection seats, and armaments but MWF-AF is largely a new aircraft and is larger and bigger then LCA-Mk1/ Mk1A. MWF-AF is longer by 9.90 % and has a heavier empty weight of 15.38%, and has a 24% heavier maximum take-off weight than the LCA-Mk1/ Mk1A. MWF-AF carries 24% more internal fuel, increasing ferry range by 40% and endurance by 50% over the LCA-Mk1/Mk1A. Indigenous content is likely to jump from 35-40% to 60-65% in MWF-AF with its F-414 engine being the most expensive imported content in the aircraft.