Chinese ZTQ-15 light tank equipped with a 105-millimeter gun was recently in Chinese propaganda video which according to Chinese mouthpiece was moved to Tibet and close to LAC after a two-month recent standoff with the Indian Army in Galwan Valley with the Chinese troops, in response to the ZTQ-15 light tank being moved to the LAC, India airlifted T-90 and T-72 tanks which have better armor and firepower then ZTQ-15 but it is not made for mountain terrain and will be difficult to operate in narrow ridges of the terrain in case conflict does take place in the region.

Many defense analysts have been advocating India to develop a light tank for such terrain but such tanks can be stuck in long developmental delays and the cheaper and easier option could be to mount a 105-millimeter gun on DRDO-TATA developed Kestrel armored personnel carrier which was supposed to have a light tank variant to act as a stop gap measure. 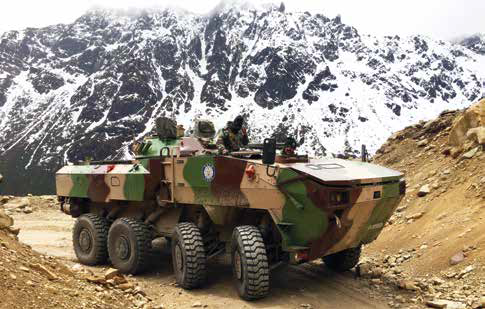 The Kestrel has a high power-to-weight ratio for mountainous terrain and is powered by a 600 hp turbocharged diesel engine and Army owned Kestrel has been tested in LAC and Sikkim for Mobility of Troops in the region. India can import a 105mm M68A1E4 rifled cannon with a muzzle brake and an autoloader from Royal Ordnance L7 for initial batches till an alternative indigenous gun is developed for the same and later for the Light Tank.

Kestrel Mobile Gun System In one to one battle with ZTQ-15 light tank would probably lose and No MGS can expect to last long in a sustained firefight against a determined foe but its role here is to match the firepower to destroy thin-skinned vehicles like Vehicle-mounted howitzers, Armored personnel carriers and provide anti-personnel fragmentation in a difficult terrain where the movement of tracked tanks are difficult.