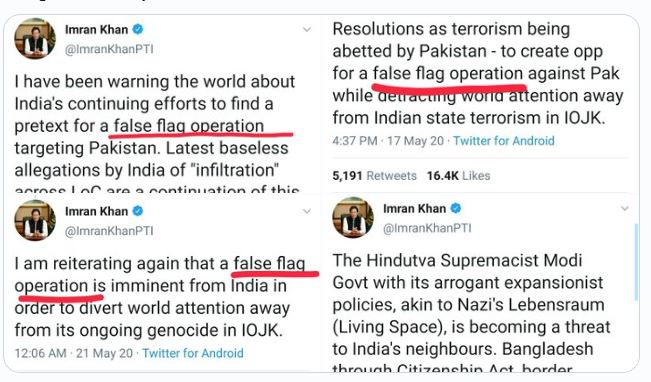 An IED expert who goes by the name ‘Walid Bhai’ send from across the border by Pakistan to target Indian forces in Kashmir almost succeed in his mission, when a 45kg IED laden Santro Car in Pulwama was detected by Indian forces and successfully defused in control manner faraway from any civilian houses thus averting major terror against the forces in the valley which Imran Khan has been hinting for a while now.

Imran Khan’s recent tweets have been a big giveaway that something big was planned by Hizbul Mujahideen and Jaish e Mohammed the dreaded terror groups supported by the Pakistani military in the valley to target Indian forces just like they did earlier in Pulwama which killed 40 CRPF men.

EX-ISI Directors in the past have been seen in Pakistani Media advocating local recruits being used to attack Indian forces, especially in suicide attacks to inflict large scale casualties against Indian forces. A few Days back a Civilian was killed when he refused to stop his Car at the Army Check post in the valley.

While many in our Liberal circle called it a ” Traffic Violation ” gone wrong and was dealt with hard handedness by the Indian Army, many in Defence analysts believe it was a possible dry run attempt made by the overground workers of the terror organization to test the response of the Army personals deployed at the checkpoint since after Pulwama attack, Army has changed protocols and any vehicle which refuses to stop at check post are assumed as a valid threat and are cleared to be engaged.

Imran Khan’s ” False Flag ” tweets and intel inputs of the last few weeks regarding IED misadventure by pro-Pakistani militants had kept Indian forces at toes and so-called ” Traffic Violation ” is now clearly was a dry run which was planned. Imran Khan has been tweeting about so-called ” False Flag ” operation by India to start a war with Pakistan so has to later claim ” I told you so ” and buy insurance against any possible retaliation from India, but Balakot operations by IAF has changed that dynamics for Pakistan military it simply cannot afford a full-scale military operation against offensive India but Bajwa and Imran are now seen in Pakistan has those who have failed in Kashmir front and have given up on Kashmir to India comes as a big setback to their image in the county and have been trying to rebuild that image back up by planning something big in Kashmir.