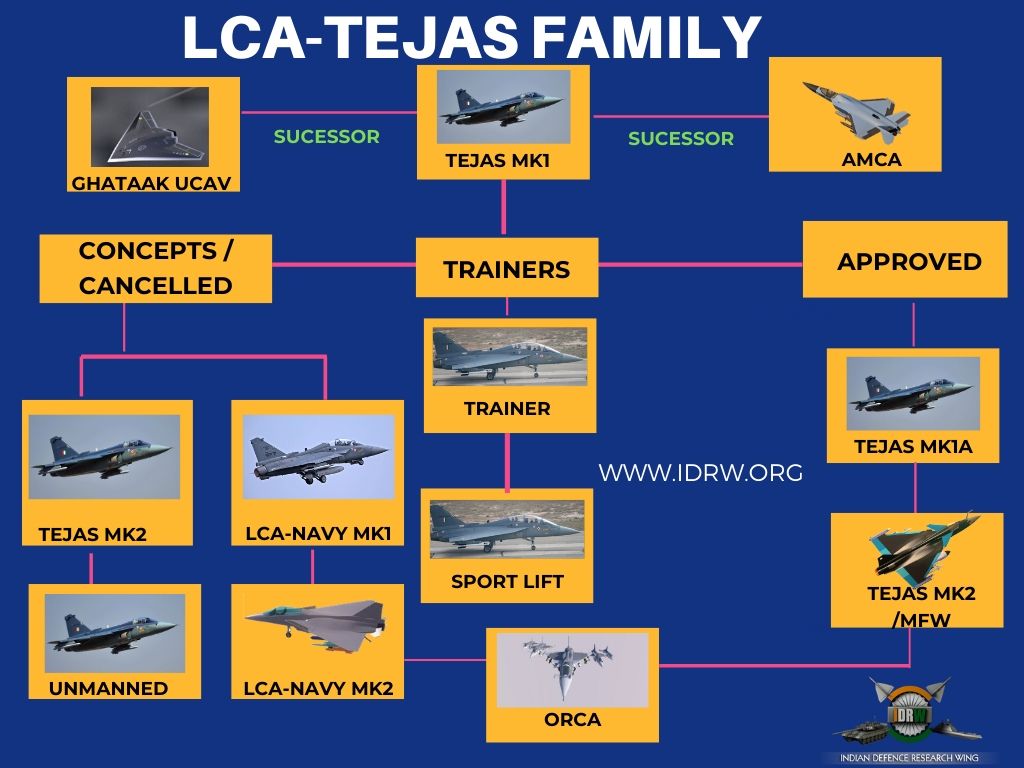 LCA-Tejas Mk1 Trainer: 8 Ordered by IAF will be equally distributed between first and second Squadron of IAF to be used to train new pilots and also as a conversion unit to train pilots coming from other types in the upcoming squadron.

LCA-Tejas Mk1A: 73 Mk1A will come, host of new features including modern AESA Radar and improved internals for ease of maintenance and better management of dead weight. Mk1A will get an upgraded avionics along with a new onboard computer with a higher processing power for future add on weapons. the final deal likely in the next few days.

LCA-Tejas Mk1A Trainer: 10 Mk1A Trainer will use the same equipment and avionics as Single Seater Mk1A.

SPORT LIFT: To Stop the cost of development of Trainers for specific types. HAL and IAF will now develop Supersonic Omni Role Trainer Aircraft (SpORT) a next-generation fighter trainer that can be programmed to mimic and train new pilots of upcoming fighter jets like Tejas Mk2-MWF or AMCA in future. SPORT will be India’s lead-in fighter trainer (LIFT) based on LCA-Tejas Mk1 Trainer air frame but will be much more advanced in terms of avionics and weapons configuration to train future pilots.

Tejas Mk2 (2018): Successor to the LCA-Tejas Mk2 (2017) program is Medium-Weight Fighter (MWF) which is still called Tejas Mk2 . 2018 Mk2 will be powered by an F-414INS6 engine and will come with DSI air intakes and Canards and will have 4 tonnes higher MTOW than Mk1 and it has been cleared by IAF and ADA plans to have its first flight by 2023 and metal cutting in upcoming months of 2020.

Tejas Unmanned: ADA and HAL have plans to use older LSP Mk1 craft to be used as Test-bed for the upcoming Ghatak UCAV program. Many of the autonomous and remote pilot control systems will be tested onboard this modified aircraft .

LCA-Navy Mk1: is a Technology Demonstrator program that is based on a converted Mk1A Air frame for the development of a carrier-based fighter jet in future programs. LCA-Navy Mk1 will be used for data collection and experimentation and development of critical technologies like landing gears and arrestor hooks for the upcoming carrier-based fighter jet. They are no plans to put them in production.

LCA-Navy Mk2: With many radical changes in the air frame after taking feedback from the Indian Navy. LCA-Navy Mk2 was supposed to be a 16.5-tonne carrier-based fighter jet powered by an F-414INS6 engine. But in 2018, the Navy decided to press for the development of a Twin-engine carrier-based fighter jet for additional safety reasons and due to poor serviceability of the current Mig-29K.

ORCA: Still in the concept stage and final design yet to be out but as per rendered images it will be Super Tejas Mk2 in Twin-Engine configuration powered by Two F-414INS6 engines with MTOW of 24 tonnes. The final design will be showcased at Aero India 2021 and work on the development will start in 2023 if cleared by Navy and Government so that it can have its first flight by 2026.

AMCA Mk1: India’s first 5th Generation fighter aircraft will be ready from 2025 but it comes with older F-414INS6 engines. IAF has agreed to procure Two squadrons (40) jets in Mk1 Configuration which will be older engines and aircraft in IOC configuration.

AMCA Mk2: will be powered by a new higher thrust rated engine and in FOC configuration. Mk2 will have a host of improvements over the Mk1 variant and will enter production in 2035.

Ghatak UCAV: will be India’s first autonomous stealthy unmanned combat air vehicle (UCAV) which will be developed in parallel with AMCA program from 2025. India is currently working on the development of a scale model to test basic design characters before it starts work on actual full-scale prototypes. Ghatak UCAV will have an MTOW of 15 tonnes which is more than the current MTOW of Tejas Mk1.