Ditch the SARAS Go for More Planes from Do 228 Family

Its high time that India ditches the SARAS, a white elephant which is the NAL built SARAS plane, whose Mk1 isa 14-seater with numerous defects and an under powered engine, and has been under development since the past nearly 3 decades. Most importantly it being developed and manufactured by NAL research lab with no expertise in manufacturing planes nor any capacity series produce planes. If ever Saras goes into series production, which is highly unlikely it will have to be done by HAL only.

Now it has come to light that a SARAS Mk2 being developed with a better performance engine and 19-seater capacity, Does that number ring a bell? yes it is the same capacity as Dornier 228 being built by HAL under full TOT from Dornier/RUAG/Fairchild. Now question is,

Reliance is building the Dornier328 turboprop, so HJAL can very well strike a deal with Fairchild Dornier  to get full TOT about the Do 328 JET and 428 JET. The former has passenger capacity of 33, same as the turboprop and latter has a passenger capacity 44. Note the incremental natural progress in passenger carrying capacity.

HAL can start building the Do328JETand with TOT can start building the Do 428JET which was never able to compete against the costlier but popular Bombardier CRJ / Embraer ERJ/Embraer E-Jets. In the same way HAL either on its own or in association with Mahindra or Reliance can try grabbing the full ToT related to 528/728/928 jets from Fairchild Dornier. None of the 3 were ever fully built, so mostly remained a concept with design being completed and only the fuselage being constructed. Below are the specifications of these 3 jets: – 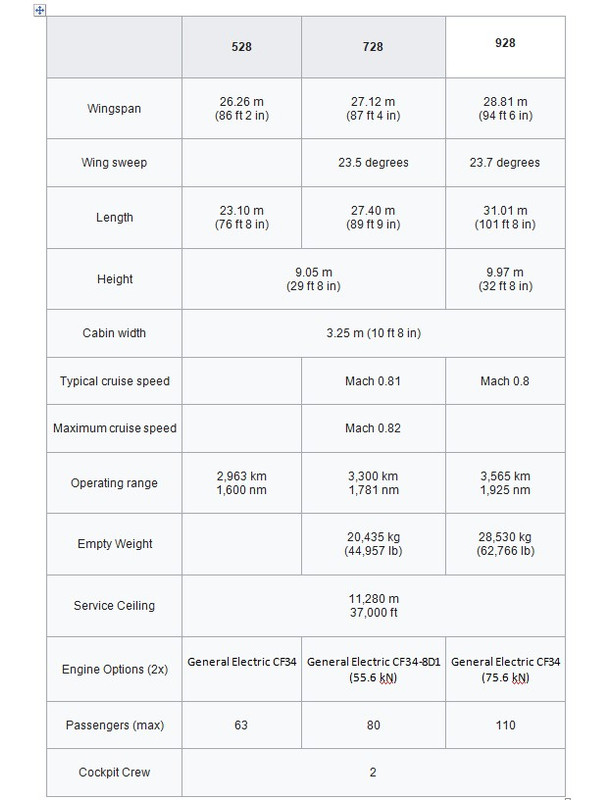 Note the incremental growth in passenger carrying capacity above from 63 to 110. This means these jets if made by HAL can practically solve the regional jet problem of India where India has been lagging behind severely and being forced to make do with Airbus/Boeing jets and other foreign design jets. Also note the fact India needs atleast 200-250 regional jets to connect every major city with far flung areas and tier II/III cities and towns. Currently HAL/NAL/ADA/ADE or anybody has not come even close to develop a concept of regional jet, only paper models have been shown in images, but this won’t help solve India’s need for low cost air travel.

So, it is a much better idea to go for already exiting design with ToT being available, only HAL has to make the right kind of offer. Also don’t forget the requirement for 200-250 regional jets will mean 1000-1500 engine requirement mostly from General Electric and some from Pratt & Whitney. This will certainly help HAL develop expertise to provide MRO for civilian engines either on its own or it can allow other private companies join hands to do it.

This will eventually result in HAL developing civilian jet engine MRO and at later stage may help in engine manufacturing subject to availability of rare earth minerals and human resources.All this creates huge potential for employment and aircraft related educational facilities/studies. Also, since other jets like Do 228/328 already have flight certification, so getting civilian flight certification for these new jets like jets like 428JET/528/728/928shouldn’t be that difficult since these are just enlarged derivatives of the original design. Also, since these jets cost much less than the popular regional jets like Bombardier or Embraer, thus creating huge opportunity for setting up several low cost airlines company as across India and generating more employment.

Case for Merging NAL with HAL

As known HAL is an aircraft maker with its own research and development unit then what is the need for keeping NAL as a separate research laboratory and duplicate resources and effort. it is a far better idea to merge NAL with HAL as then the research lab can complement HAL well with its research activities.

Let us hope better sense prevails in decision makers and they give these ideas a shot which is worth a lot in the long run in terms of providing employment, developing design expertise and above all provide low cost air travel opportunity to Indian populace, still a dream for many.

Article by JOYDEEP GHOSH /,  cannot be republished Partially or Full without consent from Writer or idrw.org