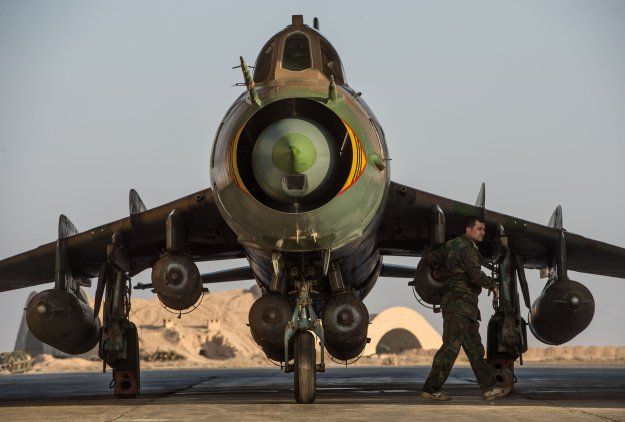 Before the March 3rd incident, Turkish Armed Forces managed to shoot down three Syrian Air Force jets over the skies of rural Idlib, this prompted the Russian military to get involved to limit the SyAAF’s losses. AMRAAM Kills in Syria 2012 onwards shows a particular situation where AMRAAMs were effective only when fired up within 30-40km range and not at DMAX range of over 100km as Pakistani air force wants to show to its people.

Back to the Su-22 incident in Syria. Presence of Russian military aircraft particularly when Russian ISR (Intelligence Surveillance Reconnaissance) aircraft like Tu-214R was monitoring airspace and Su-30SM were kept on high alert for intercepts, meant that Turkish F-16 were pushed back and were not able to intrude Syrian air space at free will anymore but on March 3rd a Syrian Su-22 on a bombing mission over are where Turkish backed terror outfits were present prompted Turkish F-16s to come near the border and fire a long-range AIM-120-C5 BVR AAM at a juicy target Su-22 which was over 50km away from the launch F-16 aircraft.

According to media reports, Russian Tu-214R monitored AIM-120-C5 BVR AAM launch from the border by the Turkish F-16 and informed the Syrian pilot who was flying Su-22 which allowed him to push his thrust throttle and make a run for back to his airbase. AMRAAM launched over 50km should have had very high pK (probability of kill) against a jet which is 40 years old and lacks modern EW systems to escape, especially for a missile system which claims a range over 100km against fighter jet sized targets but it was not to be, not only 40 old fighter bomber was warned about missile launch direction and was already running back at supersonic speed towards his airbase and successfully managed to dodge the missile.

Su-22 is not equipped with advance EL/L-8222 Airborne Self Protection Jammer (ASPJ) pods like Su-30MKI which was armed that day when PAF F-16B piloted by Squadron Leader Hassan Siddiqui fired a volley of AIM-120-C5 BVR AAMs at Su-30MKI ” Avenger-1″ at DMAX. According to Sameer Joshi, ex-Indian Air Force fighter pilot, Siddiqui fired AMRAAMs when Su-30MKI was over 60km away from this aircraft. Su-30MKI ” Avenger-1″ effective deployed chaff and flares along with its EL/L-8222 Airborne Self Protection Jammer (ASPJ) to dodge a volley of AMRAAMs and after making aggressive defense maneuvers.

According to PAF, Siddiqui was awarded Su-30MKI kill based on the thermal target being take down by an AMRAAM fired by him which was recorded by the PAF’s SAAB 340 AEW&C. IAF’s Squadron Leader Minty Agarwal who was the Fighter Controller that day said that Su-30 not only survived AMRAAMs even made a run towards PAF F-16s which were already running back after an aggressive push by Wing Commander Abhinandan Varthaman with his Mig-21Bis. IAF Chief also confirmed that AMRAAMs were fired at DMAX and fake Su-30kill was made only to divert counterclaim made by IAF of PAF F-16 being shot down.

Squadron Leader Minty Agarwal and Sameer Joshi have confirmed one thing is that deployment of chaff and flares and the use of Israeli EW pod by the Su-30MKI was one of the major reasons why the aircraft was able to dodge the AMRAAMS. Lack of any evidence presented by the PAF also confirms that what Siddiqui took down was chaff and flares deployed by the Su-30MKI and later missile also being jammed by the EL/L-8222 successfully.

Look at AMRAAM Kill-Map in Syria since 2012 shows that AIM-120-C5 BVR AAMs have no recorded claims of shotting down any combat jets or even 50km let alone 60km which Siddiqui has claimed. In fact, since the induction of AMRAAMs in the 1990s, there is no recorded kill over the 60-80km range even when AMRAAMS like C5 version have a range over 100km and most of the recorded kills have been around 20-30km range and over 40km against only against light trainer jet which was not equipped with any internal EW or RWR or even MAW).