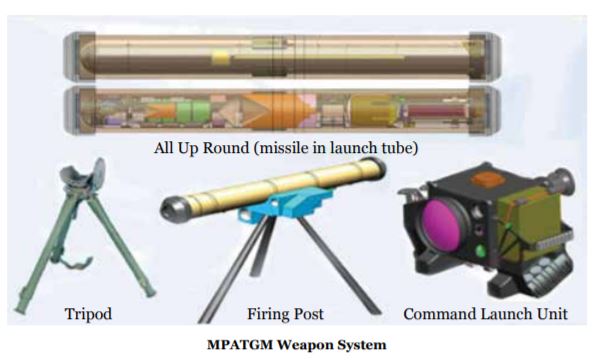 Project MPATGM was sanctioned to DRDO on 27 January 2015 with the scope work that included design and development of a third generation ATGM with a Launch Tube (LT) and Launcher and a Command Launch Unit (CLU), and demonstration of the system performance through ground testing and flight testing. DRDO entrusted the developmental work to Defence Research and Development Laboratory (DRDL)–one of its Hyderabad-based laboratories–as the nodal agency with the support of sister DRDO laboratories; RCI, HEMRL, TBRL, ARDE, and IRDE.

MPATGM Weapon System consists of three major separate elements: (i) Missile in an LT called the weapon round, (ii) the CLU including Thermal Sight (TS), Gunner Display, Command Control Unit, and Battery and (iii) the Launcher or Tripod. Launcher System was specified to be light and user-friendly with following functionalities: System power and health checks; missile seeker cooling; provision to display TAS and missile seeker images; display controls; target acquisition through thermal/day sight; and thermal battery and launch motor firing. A preliminary design of the MPATGM was carried out to arrive at an aerodynamic configuration along with different sub-systems specifications and salient features. The guidance and control system designing was carried out to meet the mission performance and robustness. The design was reviewed by an expert committee chaired by Shri SK Roy, former Director RCI, and cleared for flight implementation.

The third-generation ATGM having fire and forget capability works on the homing signal provided by a miniature Image Infrared Seeker (IIR) housed in its front end for guidance. Configuring the optical module to focus the image on the detector and realization of the signal processing electronics to achieve the 2.5 km range with the available space within a missile of 120 mm diameter was really a challenging task.

The propulsion system for the missile necessitated the design of a complex system with a launch motor for ‘soft launch’ of the missile from the launch tube followed by the firing of the main motor in flight at a safe distance of around 10 meters from the launcher to provide safety to the operator.

To arrest the large roll rates experienced by the missile while coming out of the launch tube, a jet vane mechanism has been configured in the nozzle end of the blast tube to exercise the thrust vector control in the launch phase. The main motor of this miniaturized missile comprises a dual thrust rocket motor with a boost phase and a sustainer phase to achieve top attack capability against a maximum range trajectory of 2.5 km.

The jet vane mechanism was driven by the precision servo control actuation system, which drives the tail fins of the missile for exercising aerodynamic control through the rest of the trajectory.

This demanded the design of a precision servo mechanism consisting of miniature electromechanical actuators and the digital servo controllers to house the space around the blast tube to drive each fins. Fins, in turn, drive the jet vanes through a linkage mechanism having a 1:1 transmission ratio with sufficient linear operating range.

In the available small volume inside a missile of man-portable class, to design a tandem warhead with a precursor warhead and the main warhead with an RHA penetration > 650 mm was also one of the challenging tasks.

The propellant for Launch Motor and Flight Motor was carried out by HEMRL. Design and development of most of the electronic sub-systems such as IIR Seeker and associated Integral Electronics (INEL), electromechanical actuation system and on-board signal conditioning package and telemetry transmitter, etc., was undertaken by RCI.

The Target Acquisition System (TAS) based on thermal sighting principle is part of the launcher and is being developed by IRDE. Preliminary design review of TAS has already been completed and a prototype unit is ready. The mechanical parts of the tripod launcher are being designed at DRDL. Its preliminary design is complete and fabrication is under progress. Tandem Warhead of the missile is being developed at TBRL and is in the final stages of realization and testing. Bharat Dynamics Ltd (BDL) is the industrial development partner.

The missile has undergone the following stringent laboratory- and ground-level tests during realization of the various sub-systems prior to flight testing: Control and guidance design testing in wind tunnel; aerodynamic data and performance were evaluated by six DOF simulation study; propulsion system performance was evaluated in number of static tests conducted at 100 t-test bed at DRDL; five POP out tests were carried out at DRDL to evaluate launch phase dynamics and safety wherein propulsion system consistent performance is achieved; integrated mode testing of the propulsion system along with jet vane mechanism and control actuation system at 100 t-test bed at DRDL and Hardware in-Loop testing and evaluation of control algorithm incorporating sensor package, control actuation system and integrated electronics hardware at RCI. The missile being developed by DRDO will be comparable to the best ATGM systems in the world, viz., Javelin by US and Spike-MR by Israel.