After New Maps, Nepali Netizens call for Greater Nepal maps with Sikkim and Shimla in it 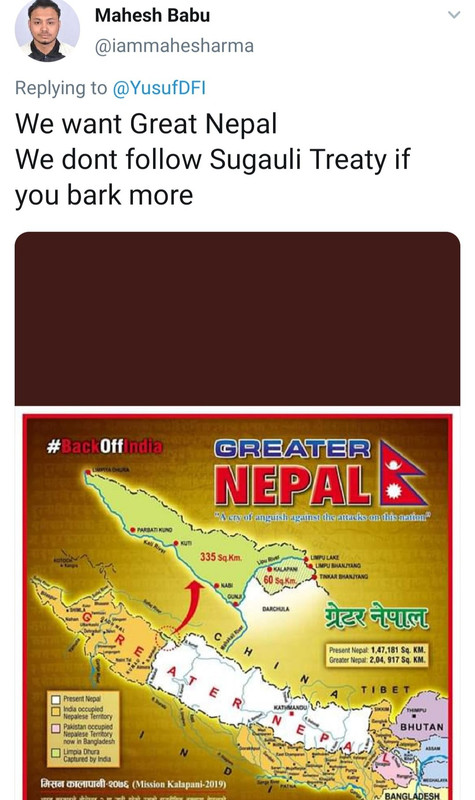 As soon as Nepal’s Puppet Prime Minister KP Oli took taunts at India’s and showcased New Political maps of Nepal with Indian territories Supporters of the ruling dispensation of Nepal Communist Party (NCP) took to Twitter to Troll Indian media and also demanded that since India doesn’t respect British era Sugauli treaty and refuses to return areas like Lipulekh, Kalapani, Limpiyadhura making up around 335km of areas, Nepal should also claim the present-day Uttarakhand state of India, the Sirmaur district of Himachal Pradesh, Sikkim and Darjeeling area which were returned to British India after their defect.

King of Nepal was defeated in 1814–15 Anglo-Nepalese War and ejected them from the present-day Uttarakhand state of India, the Sirmaur district of Himachal Pradesh, Sikkim and Darjeeling area by 1815. King of Nepal was forced to accept a peace treaty with the British (the Sugauli Treaty) in March 1816 and ceded to East India Company the territories in India they had won since 1791 against smaller kingdoms.

Nepal Communist Party (NCP) supporters have forgotten that areas which they want to include in the so-called Greater Nepal were won by defeating smaller Himalayan kingdoms which were taken back after East India Company defected them. Sugauli Treaty was already was superseded in December 1923 by a “Treaty of Perpetual Peace and Friendship.” and they had lost even areas which initially they had claimed.

Twitter debates have also seen some Pakistan’s changing their handle name and display picture to show themselves as Nepali to support this Greater Nepal but hardcore cadres of Nepal Communist Party (NCP) which basically was a Maoists terror organization in Nepal long civilian war against is Monarch in previous regimes have also called for arms uprising to take back these areas from India.