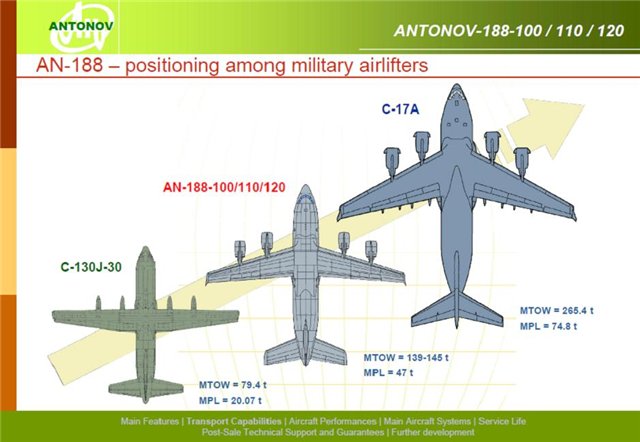 In size terms it will sit between the Lockheed Martin C-130J and Boeing C-17 strategic transport, possessing a maximum take-off weight of 140t and payload of 40t. both of the air-lifter are in operational with India and will come with western avionics to meet NATO Standards after Turkey joined the program last year.

AN-188 on offer to India will have three engine option. cost-effective D-436-148FM turbofan engines, rated at 8,800kgf each or AI-28 new-generation engines with greater fuel efficiency which are both manufactured in Ukraine or CFM56 7B engines which  is manufactured by a 50/50 joint venture between General Electric (USA) & Safran Aircraft Engines (France).

AN-188 can accommodate up to 130 fully equipped paratroops. and also can airdrop up to 21 tonnes of airborne infantry fighting vehicles or It can accommodate 300 troops. Transportation of wounded. AN-188 is a direct competitor to the French Airbus Military A400M Atlas high-winged military transport.

After India pulled out of Russia’s MTA/IL-214 Air-lifter program due to difference regarding the choice of engines, Ukraine has been very keen to offer some of its Transport range to India and is also pushing for the sale of AN-132 light multi-purpose turboprop cargo aircraft based on AN-32 aircraft operated by IAF. According to the company, AN-132 will be demonstrated at the static show for all visitors during the AeroIndia show.