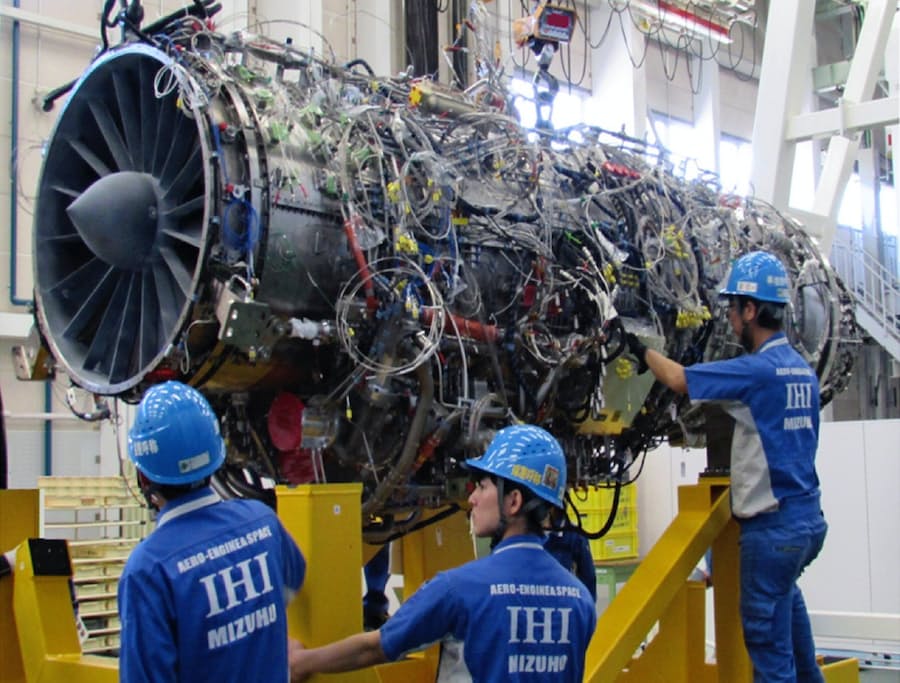 According to latest media reports, F-3 design will be only confirmed in 2020 but it will much bigger aircraft then X-2 Shinshin Advanced Technology Demonstrator aircraft which flew in 2016 and many defense analysts predict that Japan is going for an F-22 class fighter jet which means it could have an MTOW of over 35 tonnes and to meet power demands of such Heavy class stealth fighter jet, Japan as developed and begun testing of XF-9-1 low-bypass turbofans developed by Ishikawa Heavy Industries (IHI).

According to IHI, XF-9-1 is a low-bypass turbofan already which has already demonstrated 108kN of dry thrust and also has reached engine wet thrust requirement of 150kN thrust. XF9-1 prototype developed is close to the General Electric F110 in size, and is comparable to the Pratt & Whitney F119 in terms of thrust class. F119 turbofan engines are what powers F-22 fighter jets and have 116kN of dry thrust and 156kN wet thrust but XF-9-1 is half-meter shorter and 30 centimeters slimmer than the F-119, leaving more room for internal weapons.

In 2016, when Mitsubishi X-2 Shinshin experimental aircraft took to air for the first time and was to be used as a template for testing many of the technologies required for the F-3 program but it was mocked by many western and Chinese defense analysts after it was found that Japan used an under powered IHI developed XF5-1 low-bypass turbofan engines which barely generated 49kN of Wet thrust but many were in for shock and surprise when IHI showcased fully developed XF-9-1 prototypes in 2017 and started testing them in 2018.

XF-9-1 prototype already has gone through Maximum verification thrust tests in 2018 and already demonstrated 108kN of dry and 150kN of wet thrust, IHI team which begin its research in the development of low-by pass turbofan engine in ’70s, started from developing a basic F3-IHI-30 engines (16.32 kN ) to power its T-4 Subsonic trainer and then later moved to develop XF3-400 engine (30kN) and later developed XF5-1engines (49kN) which became base to develop F-7 (60kN) engine which is used to power Kawasaki P-1 maritime patrol aircraft but Japan was still not able to develop any engine beyond 60kN Wet Thrust which was one of the reasons many mocked them when they announced to develop 5th generation fighter jet with an indigenous engine.

Back home in India. Our low-bypass turbofan experts have developed the Kaveri prototype (K9) engine which has been successfully tested and also demonstrated 83Kn of Wet thrust at Gromov Flight Research Institute in Moscow and even has been certified by French Safran for flight-testing onboard a test-bed aircraft. Current 83Kn of Wet thrust is not enough to power 83 LCA-Tejas Mk1A or even older Mk1 variants but headway in the program do show that influx of additional funding and integration of other agencies along with additional manpower, along with organizations changes in the GTRE can help develop an engine which can be used to develop a wet thrust range from 110Kn to 125Kn.

A Successful Kaveri engine is a necessity not only for the AMCA program but also for the upcoming Ghatak UCAV, SPORTS ( Lead in fighter), Medium Weight Tejas MkII, Naval TEDBF, Naval-AMCA programs. Spin-offs of the Kaveri engine program can be used to develop small turbofan engines for future military cargo and transport planes in the near future.

Instead of running behind the United States for Joint venture and transfer of technology for the core technology, which they will never agree to, India should instead focus on developing K10 engine based on the experience and on the transfer of technology it has received from Russian AL-31F and RD-33 engines to develop a new engine which can meet western standards, but our immediate focus should be to complete flight trials of the K-9 engines on a test-bed aircraft preferably first on a twin-engine Su-30MKI powered by K9 and AL-31F engine and later on LCA-Tejas Prototypes so that at least a Dry variant of the engine generating 50kN of thrust will be ready for production for the Ghatak UCAV program.