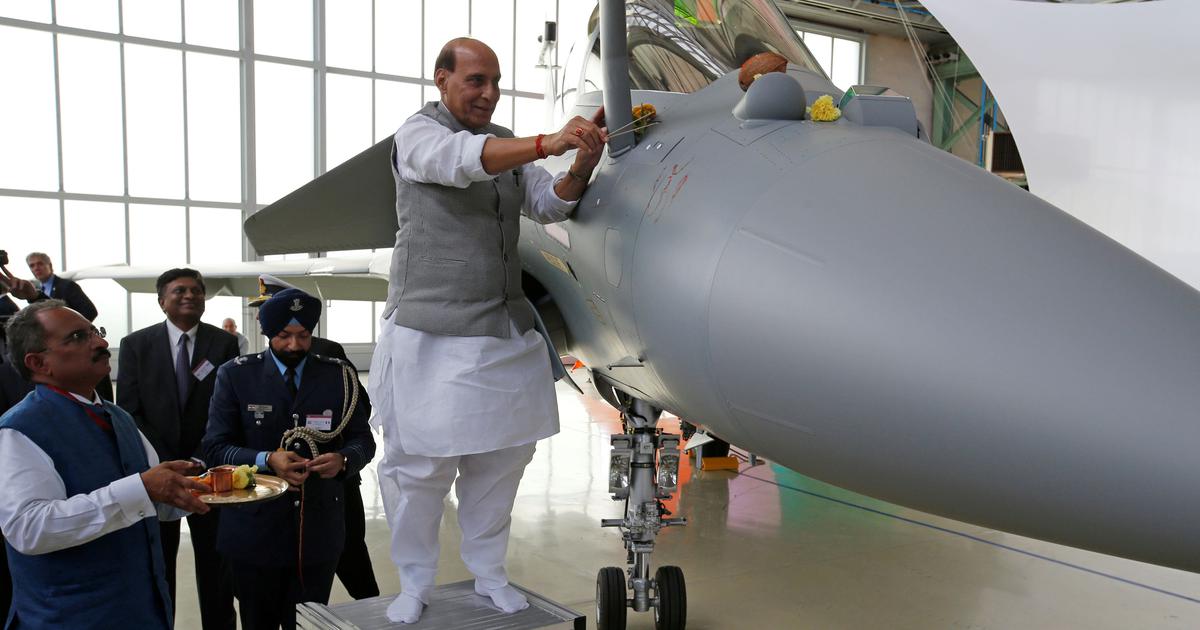 The hoopla over Shastra Puja during induction ceremony of India’s Rafale fighter Jet RB-1 in the presence of two senior IAF officials, India’s Air Attache and Deputy Air Attache from the Indian Embassy of France by the Defence Minister Mr. Rajnath Singh refuses to die down. The Raksha Mantri later shared some photographs of the ceremony on social media platform wherein he can be seen offering incense sticks, flowers, coconut and not to forget the green lemons under the wheels besides inscribing the enchanted symbol of “?” on the front fuselage of the fighter jet prior to proceeding on for a sortie on the same aircraft.

His posted on the twitter “Performed Shastra puja on the auspicious occasion of Vijaya Dashami. Worshiping weapons on Vijaya Dashami has been our tradition.”

Shastra Puja, on the occasion of Vijaya Dashami has been an ancient Indian Tradition that is also being followed widely in the Indian armed forces along with the offering of Puja during Induction / commissioning ceremonies of Fighter Aircraft, Weapons and warships.

Politics apart, Induction ceremony and Shastra Puja of the Game Changing Rafale Fighter Aircraft on the auspicious day of Dussehra can be considered most propitious considering the Air Craft crashes that the Indian Air Force witness every year.

As per information provided in June 2019 by the Ministry of Defence to the Indian Parliament, 27 Indian Air Force aircraft have crashed since 2016. In the 2016-17, six fighter jets, two helicopters, one transport aircraft and one trainer had crashed. In 2017-18, we lost two fighter jets and one trainer aircraft in crashes. These crashes include planes like MiG, Mirage 2000, Su-30, Jaguar, among others. The total loss of lives in these accidents, including 12 pilots, is 46 as seven aircrew and 27 service personnel also died in crashes. In the year 2019, the IAF has lost 20 Airmen and 12 Aircraft in various crashes. If the crashes involving helicopters, trainers and transporters are included then the losses go up to 37.

I am very sure that the IAF officials present during the Shastra Puja of India’s First Rafale must have removed all the Foreign Object Debris (FODs) poured during the Puja, onto the Fighter Aircraft, prior to its maiden flight with the RM in tow and ensured Flight Safety that is paramount in flying operations.

The IAF is in a constant fight to eliminate foreign objects from the flight line on the base. Such Objects are known in the aviation community as “FOD” or “foreign-object damage,” it is among the top causes of problems for aircraft. The first motto of aviation safety has been “Eliminating FOD saves lives and saves aircraft,” The IAF Airmen have been very aggressive in controlling FOD and do a good job to eliminate the danger.”

Airmen working in the maintenance sections of the wing have been performing routine FOD Walks, in which dozens of Airmen line up and walk along the flight line, picking up any foreign objects they see. Aircraft crew chiefs carry out muster of inventories of all their tools while working on their aircraft, to ensure that nonentity was left behind that may root damage. The hazards of FOD, and the pretty simple steps that can be taken to prevent it, is taught to all Indian Air Force personnel from the first day of their service.

As per an estimate of the United States’ National Aerospace FOD Prevention agency, counting both military and civilian aircraft, FOD costs the global aerospace industry about $4 billion annually, in terms of damaged equipment and losses of invaluable operational assets of national security, reducing air defense and other mission capabilities.

The placing of so many FODs on the Rs. 1638.88 crore, 4 plus generation omni role fighter aircraft which has latest sensors fitted on almost every inch of its body, which also possesses weapons, avionics, electronic counter measures, AESA (Active Electronically Scanned Array) radar combined with the Meteor beyond visual range (150 km) air-to-air missile is hazardous.

The Jet engines create a tremendous suction as they operate. Most turbojet engine aircrafts have a warning/safety zone during operation of at least 25 feet around the air intake area at the front of the engine. Even a small object sucked into an engine can cause significant damage to the high-precision engines and other systems in aircraft.

Therefore, a veteran Jawan and a former Fire & Safety professional who has participated in numerous FOD parades / walks, I would strongly suggest that the Senior IAF officials who had organized the shastra puja should have taken precautions and avoided placing of serious FOD hazards like the Flowers on the fuselage, burning of the Incense Sticks near fuel filled Aircraft and also advised the honorable Defence Minister on the same by arranging for the Shastra Puja at a safe distance from the Aircraft.

All said and done, this article is neither written with any purpose of maligning the services’ traditions nor putting a finger of blame on the Raksha Mantri of the Nation. But, is an honest effort of this veteran at reporting an operation Risk through air force system of error management (AFSEM) thus assisting the Indian Air Force in predicting and avoiding accidents / incidents, so that, we can learn from our mistakes. It is an attempt at “owning up” so that we can achieve 100 percent flight safety.

I end my case with my all time favorite flight safety slogan, “Safety in air starts from the ground. Be safe at ground, to be safe in air.”

Article by PETTY OFFICER MANAN BHATT ( Veteran) /,  cannot be republished Partially or Full without consent from Writer or idrw.org