The total length of Tejas Mk1/Mk1A stands at 13.20m which means Tejas Mk2 at 14.7m will be 1.5m longer than Mk1/Mk1A which is a considerable increase in size which will lead to an extra range and weapons loading capacity.

Old concept information of Mk2 as per ADA brochure was about 13.7m in length which means that new Mk2 concept is at least 1m longer than the previous concept which was showcased in Aero India 2017.

Since IAF as set Mirage-2000 as the benchmark aircraft which Mk-2 Concept needs to emulate and supersede in its performance, it is fair to compare it with Mirage-2000. Overhaul length of Mirage-2000 is 14.36 m, which means at 14.7m length, Mk-2 is longer than by 0.34m in direct comparison with a Mirage-2000 which puts it in Medium Class of the fighter jet category.

Design : Tejas Mk2 maintains most of the legacy design of the Tejas Mk1/Mk1A but minor tweaks can be seen in the design which will lead to overhaul performance improvements in the aircraft.

Canards: One of the most important features seen in the Tejas Mk2 design is addition of Canards just above the engine intakes right behind the pilot. Additions of Canards is likely to give Mk2 an optimum combination of maneuverability, acceleration, top speed, and short-field performance. Canards, when coupled with the improved digital Fly-By-Wire Flight Control System (FCS), will also lead to a better Dog-Fight capability. 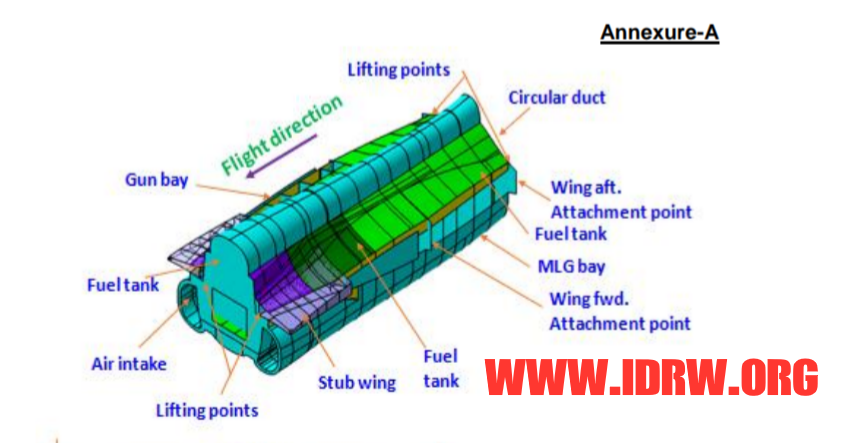 Re-positioning of cannon: After Canards, a major change seen is re-positioning of 23 mm twin-barrel GSh-23 cannon from the intake port of air intakes in Tejas Mk1/Mk1A now 23 mm cannon will move to right side of the mid-fuselage section which is very interesting position unseen in any other fighter aircraft. Sukhoi-30MKI has a similar position but that is closer to the rear cockpit and also quite forward from its canards. The Mk-2 gun will be positioned behind its Canards in such a way that it avoids hitting its own canards in-flight.

Weapons Station: Re-positioning of 23 mm twin-barrel GSh-23 cannon frees up another weapon station under its air intake ports which means Mk-2 will have 9 Hard points instead of 8 seen in Tejas Mk1/Mk1A. freeing up of 9th hard-point means that Mk-2 neither can carry 2 additional CCM air to air missiles like ASRAAM with Dual store pylons or a smart bomb like Smart Anti Airfield Weapon (SAAW).

Note: Since details of wings and landing gear details are yet to be disclosed width and span dimensions can’t be calculated at this point of time.