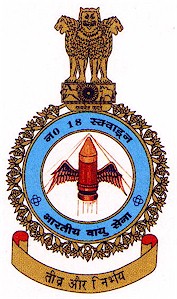 Second Light Combat Aircraft Tejas Squadron in Final Operational Configuration (FOC) will be resurrected by the No. 18 Squadron, Flying Bullets to be inducted into the Indian Air Force on 27 May 2020 as per information provided by the ” Delhi Defence Review “.

The squadron last flew the Indian license-built Mikoyan MiG-27ML until the aircraft was withdrawn from Indian service in April 2016. No.18 Squadron (Flying Bullets) will be initially be based in Sulur Air force Station in TamilNadu and might later move to Kalaikunda Air Force Station which was the previous base for the Squadron, No.18 Squadron also has operated from Air Force Station Hindan in the past.

First FOC Certified LCA-Tejas Mk1 SP-17 (formerly known as SP-21) might be lone aircraft that might be handed over by the HAL to the Squadron due to lack of further aircraft being ready at the moment. SP-18 is planned to be tested flighted soon so that aircraft could be handed over to the second squadron soon but due to the extended lockdown delivery schedule of the further aircraft down the line might be affected for the next two months.