Scenarios : Will IAF have room for Tejas Mk2, ORCA, and AMCA at the same time?

By 2035, Indian Air Force (IAF) plans to retire nearly 300 front line fighter jets which include 100+ Upgraded Mig-21Bis, 90+ Jaguar Ground Strike aircraft and 110 mix fleet of Mirage-2000 and Mig-29, according to some media reports, IAF also has plans to retire the first batch of 50 Su-30MKIs from 2035 onwards which brings the total tally to 350 jets by 2035, even though we are not factoring in close to 120+ Mig-27s which have been retired from 2010 onwards and are yet to be replaced with the newer planes.

IAF’s current procurement plans involve the purchase of an additional 8 Su-30MKI, 21 Mig-29, 36 Dassault Rafale, 40 Tejas Mk1, and 83 Mk1A along with procurement of 114 jets of International origin. which by 2030 will see the induction of nearly 300 jets plus there will be room for nearly 100 MWF-Mk2 which is already under development and it is expected to enter production by 2026 and could have produced at least 50 jets by 2030.

50 more MWF-Mk2 might come in period from 2030-35 for IAF which will mean that IAF will have around 350 newer generation jets from a period of 2020-2035 when it will be retiring nearly 300 jets in this period and the replacement rate will be one to one for the next 15 years assuming that all the procurements take place in time and deliveries are on schedule. IAF which has sanctioned strength of a fighter fleet of forty-two squadrons usually requires nearly 800 jets at its disposal for a two-front war with China and Pakistan but even in the 2030-35 period, it will have only 300 jets replacing 300 older jets thus negating any major bump in aerial firepower fleet.

IAF fighter fleet strength in 2030 will rise briefly but by 2035 Jaguar and Mirage/Mig-29 fleet will be flagged for the replacement which will again flatten the growth curve for the IAF in the period unless it decides to prolong this jets in service. By 2035 350+280 Su-30MKI fleet will still make its fleet strength of 630 jets if we assume all Jaguar and Mirage/Mig-29 fleet is retired by then, still IAF will be short of nearly 200 jets even in 2035.

IAF will induct AMCA with older F414 engines from 2030 onwards and it is expected that the first 40 jets will be delivered by 2035 when the production for Mk2 will commence but IAF will still be short by over 100 jets even in 2035 assuming all jets are inducted in time and older ones also retired in time. IAF is likely to agree to field at least 50 more MWF-Mk2 from 2035 onwards. 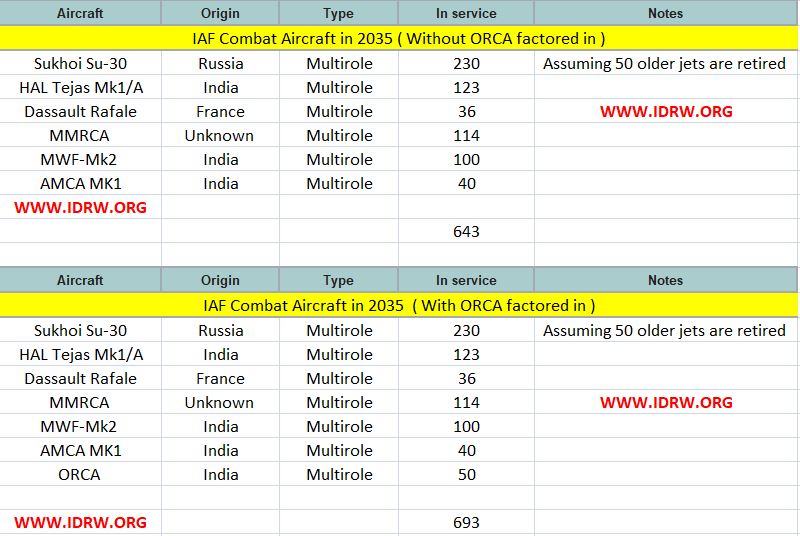 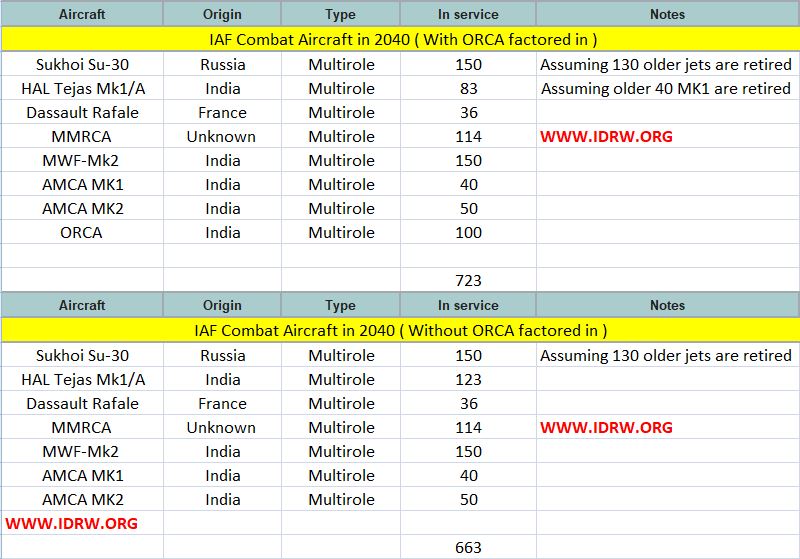 Note: Attrition due to accidents if calculated at an assumed average of 6 jets per annum will mean every 5 years 30 jets will be less in the fleet, so around 60 jets will be less in 2030 and 60+30 in 2035 and 60+30+30 in 2040. Since it is difficult to know exact make of the jet which will be lost over the years calculation is for the whole fleet.