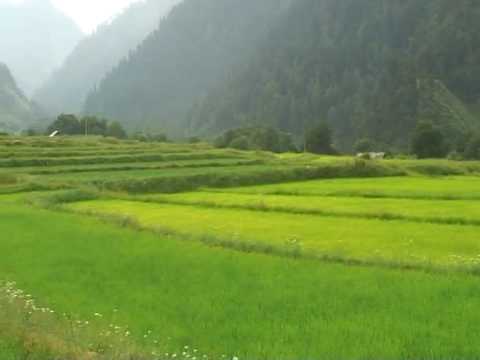 1953 was a watershed year in the history of Kashmir as it marked the beginning of state sponsored ethnic cleansing. The most critical part of this strategy was the Land Reform Act – widely known as Kashtkaar Act. Sheikh Abdullah introduced this act to grab the land owned by the minority aboriginals. About 95 per cent of the land custodians in the Kashmir valley were still Hindus.

These custodians, contrary to the elitist theory peddled by vested interests also belonged to the lower income group – often, the smaller land managers would till the land themselves.

While agricultural land was mostly owned by Hindus, the lucrative sericulture, horticulture and floriculture land meant for cultivation of fruits, flowers and silk was under control of the Muslim majority. Post-independence, the land ownership continued until the accession of Kashmir with India. However the grand land reform act of 1953 overturned this. The custodians went to the court and later on it was decided that a pittance of 200 Kanals (unit of land area) maximum would be allocated to male scions of the Hindu families (father, son and grandson).

Astoundingly, the lucrative horticulture land with Muslims was exempted from this draconian act. My maternal family – the Kilams, along with other families played a key role in fighting these legal battles across various courts for over 10,000 Kanals of land that was usurped under this brazen state sponsored land grab.

In 1975 the then Congress led Chief Minister Mir Qasim pushed this draconian act of persecution to another level by removing the 200 Kanal law that Hindus by then saw as fait accompli. Mir Qasim introduced another atrocious law by snatching away those 200 Kanals of land and gifted to the Muslim tillers.

Due to various representations by Kashmiri Pandits the then Mir Kasim government relented to the extent of offering a meager 1/4th of the produce to be given to the Pandits for 20 years only and then all rights would cease. Overnight, in a manner of speaking, the miniscule minority was rendered a pauper.

In the same year (1975) Zamindar Association of Kashmir was formed and representations were made to the ousted Shaikh Abdulla for parleying with the government to restore the previous Act. In a meeting at Dachigam, Shaikh agreed to intervene provided Hindus wholeheartedly supported him in forthcoming elections and ensured that all Hindus voted for him and his National Conference. As destiny would have it, Mir Qasim fell off with Indira Gandhi and that led to the famous Indira Shaikh accord that paved the way for Shaikh Abdulla to return to power. Unexpectedly and regrettably, upon becoming the Chief Minister, he reneged on his commitment but relented to the extent that only 100 acres of land was restored to Pandits for 20 years.

However, temple property, orphans and the land to widows was fully restored to the extent of 200 acres only. Despite cosmetics, the travesty did not end for the Pandits. By then the systematic state sponsored ethenic cleansing was unleashed and Shaikh introduced a resumption form to be filled for reclaiming even this remainder of 100 acres of land supported with another draconian law.

The law stated for Hindus to reclaim the meager land, it had to be within 6 kms of their residence. The dance of injustice reached its zenith with implementation of this new law and procedure and a vast majority of Pandits were outside the 6 km prescribed limit.

The travesty did not end there, this land was gifted to the Muslims against a paltry levy of Rs 500 per Kanal against the prevalent rate of Rs. 1 lakh per Kanal at that time. The horrors of this land grab kept getting worse even for the handful of Hindus who were found to be within the 6 km limit. The Tehsildars, Patwaris and the government machinery created loops within loops to drag the paperwork leading across the board litigations against this persecution of Kashmiri Pandits.

He further introduced laws which included conditions like giving away the land from the Hindu owners to tillers at a throw away price of Rs 500 per Kanal. This was primarily for the land that was outside the 6 km limit.

The stage was set and the result was the Pandits lost more than 90 per cent of the land owned by them. Later on (1990s) the same land was taken over by railways under leadership of Nitish Kumar at a huge compensation of Rs. 2,50,000 per Kanal.

This was a brazen illegal act by the erstwhile government as this land was owned by the resident Pandits, illegally sold and acquired by the Railways. Many legal cases of ownership dispute continue to be buried in the dormant administrative camaraderie for ethnic cleansing of the Hindus.

The vast majority of Hindu land is still in legal disputes in various courts, usurped and compensations are taken by illegal occupants who have obviously altered the land records and the original owners are in exile – unable to defend the last remains of their ancestry.

In this horrifying tragedy to loot Hindus of their rightful land, Shia dominated Budgam set a humanitarian example. The presiding Maulana and the head of the sect publically revolted against the atrocities against Hindus. He instructed all the Muslims, predominantly Shias to restore all such land back to Hindus. He proclaimed this Land Reform Act and all the land that was grabbed from Hindus under this act as unholy and unIslamic.

Budgam set an example of universal brotherhood by handing over the land back to Hindus with one caveat that in a situation that the Hindu wishes to sell the land then first right of refusal and an NoC must be first obtained from the tiller. In the same 90’s shameful and hideous act of forcing the Kashmiri Pandits out of Kashmir was enforced. The legal status of the land ownership though may have remained the same however the on ground situation is completely different. All the acts and decisions taken together in entirety right from 1948 will sum up to only one conclusion, land was grabbed and snatched from Kashmiri Pandits and was used as a very effective tool for Islamisation of Kashmir.

Be it PDP, National conference or Congress, all the parties did their best to ensure that Kashmiri Pandits are deprived of everything which may help them to even think of coming back to Kashmir. Post the forced terror induced migration of Hindus it is common knowledge and widely reported how their homes were illegally occupied, looted and set on fire with the sole purpose of restricting their return. Of Course, article 370 which is often confused with terror was actually a vital tool to deprive Hindus of means to exist. Transferring land without compensation was possible since the provisions of the Indian constitution did not yet apply in the state.

The country’s leadership had ensured that the right to property was included among the fundamental rights, which could not be challenged.It is relatively well-known that many Kashmiris almost worshipped the ground on which Sheikh Abdullah walked. Seventeen persons were killed in stampede at his funeral. However, the roots for his iconic popularity are rarely discussed. Some vested groups, ignorant media and politicians alike keep pedaling the elitist attitude of Kashmiri Pandits as among a cause for their ouster from the valley.

Rest as they say is history, more than six hundred thousand Kashmiri Pandits are living a life of exile inspite of having estates belonging to them and citizenship of a country which denies even talking about them. We continue to live watching our land and heritage being grabbed and illegal occupants making money out of it.