Revisiting the Sino-Soviet conflict and its relevance today 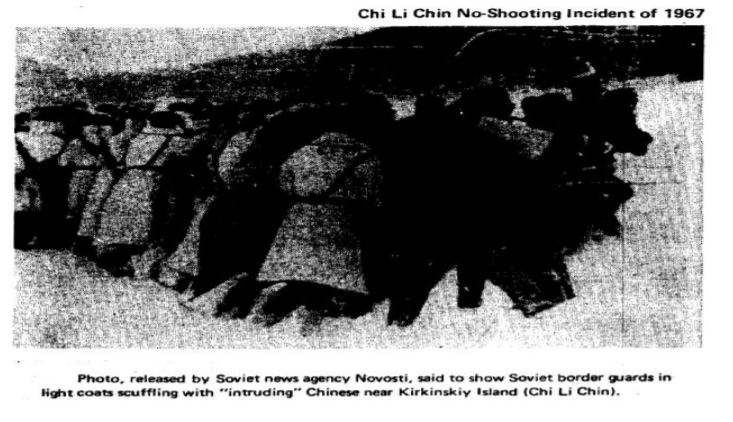 In the events leading upto the current standoff in Ladakh region it would be wise to try and understand some important incidents in the second half of the 20th century regarding China. There are several prisms through which the nature of Chinese intrusions can be viewed. However I shall focus on one theme only which is to understand the reasons as to why China resorts to these sudden provocative maneuvers seemingly out of the blue and whether there is a precedent to it. We need to look back at some major incidents that occurred in the 1960s to see some parallels to the happenings of the past few years which have culminated in the current faceoff.

Throughout the 1960s the changing geopolitical situation and China’s own domestic political changes led to increasing border issues cropping up between China and the Soviet Union in the Manchurian region amongst other regions. As the Chinese increasingly started claiming several areas which were controlled by the Soviets, incursions became common with even chinese civilians crossing the border to confront the soviet border patrols.

Coinciding with the cultural revolution led by Mao there was a perceptible upswell in the hostilities involving the PLA and the Soviets. For the sake of brevity I shall not go into the details which led to it in this writeup and only focus on the incident which is known as the Zhenbao(Damansky) island.

The following passages are from the CIA intelligence reports. “In February 1967 a firefight reportedly occurred on the Xinjiang border and a probable exchange of fire took place at a point on the Amur(river). Pushing and shoving encounters involving border patrols became widespread along the Ussuri and Amur rivers, and many of the 1969 firefighters were at points which had been tense for at least two years. Marshal Grechko( who was the Minister of Defense from 1967) informed Indian officials, there had been 1200 “clashes” between Chinese and Soviet border guards in 1968 alone and that in every case they had resulted from Chinese probing actions into Soviet territory.”

In 1967, in the region of Manchuria a gunfight broke out between the soviet border guards and the chinese soldiers on the contested island of Zhenbao(Chen Pao). By the time the smoke cleared it became clear it was an ambush orchestrated by the PLA soldiers rather than a conflict. However what is of importance is of the manner in which it erupted 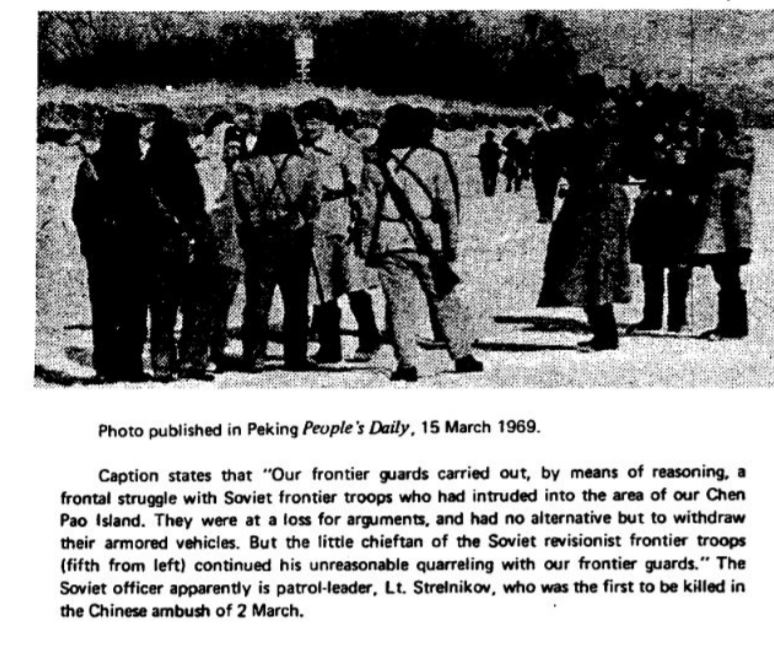 “On 2 March, Chinese border guards with the help of regular PLA forces skillfully ambushed (Lt) Strelnikov unit on the ice near Chen Pao,killing him and 30 Soviets in the subsequent skirmish. “ In further detail :-

“A group of Chinese near Chen Pao arranged themselves in two frontal rows and appeared to be unarmed. When they were about 20 feet from (Lt) Strelnikov advancing group, the first row scattered to the side to allow the second row of Chinese to pull submachine guns from under their coats and open point-blank fire on the Russians.(Lt) Strelnikov and six of his men were killed outright. At the same 3 time, from hidden foxholes on Chen Pao on the Soviet right flank, some 300 Chinese opened fire, catching the other part of the Soviet group by surprise. Another Soviet border guard unit moved up and engaged the entrenched chinese.” Following yesterday’s (June 15th) violent clash which reportedly has led to casualties on either side has made it clear that the chances of several such clashes or outrightly hostile behaviour during mutually laid down engagements are highly possible in the near future even if there is no indication of it blowing out of control. The traditional opaque communication that emerges from the Chinese establishment leaves a lot of space for speculation regarding the motives.

Two sentences in the document are of particular importance.

Firstly “The Soviet policy of selective, on-the-spot, military retaliation presented the Peking regime no significant military risk, and it did not cause Mao to negotiate or cease probing.” This can possibly be equated to the current strategy adopted by the Indian establishment by concentrating the efforts in Pangong Tso and the Galwan valley.

The second sentence is the following. “Employing this low-risk strategy, Mao’s policy of 10 years of probing relentlessly moved always in the one direction of disputing Soviet jurisdiction. Only by establishing a credible intention to go beyond small-scale border reprisals was Moscow finally able in September 1969 to convince Mao that the risks were now higher for pursuing his pinprick policy.” Despite glaring differences between the circumstances of these conflicts and our conflict with China the one contiguous feature has been their policy of attempting to gain small gains in territory leading to long term advantageous military positions and symbolic political tools. This is evident from the sharp increase in border 4 transgressions from 2013 onwards culminating in the standoffs in the Daulat Beg Oldie (DBO), Chumar and Demchok villages respectively. Post 1962 a sustained effort has been carried out by the Indian government throughout the years to augment and upgrade the ability to respond competently with a particularly strong pace of border infrastructure augmentation since 2015.

The language used by by Chinese authorities at all levels both then and now regardless of the adversary contains the same core accusation that the adversary’s actions have violated the border rather than the other way round and there has been an attempt to alter the status quo which presents dangers to their national integrity. It is important to keep in mind that the first point of China’s Defense policy in the new era has been to “To deter and resist aggression” and is echoed in the Xi Jinping thought( to strengthen the National security) which was incorporated into the Chinese constitution in 2017 at the 19th National Congress of the Communist Party of China. The fact that such conflicts have ensued even on clearly demarcated borders (not on undemarcated borders alone) indicate an adherence to China’s “Salami slicing” strategy is here to stay and possibly increase in frequency and intensity. The Indian establishment would be prudent to not adopt a mirroring approach as the sole option, as this would be responding for each intrusion and ensuring status quo only if the intrusion and the troop build up is below a certain threshold (wherein talks are held to diffuse the situation and revert to the status quo). It must be accompanied by a series of moves which grant India the option of actively reciprocating the pin-prick policy rather than having fending off their thrusts and carry out effective mirror deployments to maintain the status quo.

A major rethink is needed to not just accelerate infrastructure but to be a step ahead and consider all the options at hand including the threat of localised high intensity 5 incursions which are temporary in nature as pre-emptive moves in order to prevent or at the least extract a cost for potential misadventures and force them to come to the negotiating table for the same.

Disclaimer : Articles published under ” MY TAKE ” are articles written by Guest Writers and Opinions expressed within this article are the personal opinions of the author. IDRW.ORG is not responsible for the accuracy, completeness, suitability, or validity of any information on this article. All information is provided on an as-is basis.

The information, facts or opinions appearing in the article do not reflect the views of IDRW.ORG and IDRW.ORG does not assume any responsibility or liability for the same. article is for information purposes only and not intended to constitute professional advice . Article by HARSHA PAIKE,  cannot be republished Partially or Full without consent from Writer or idrw.org