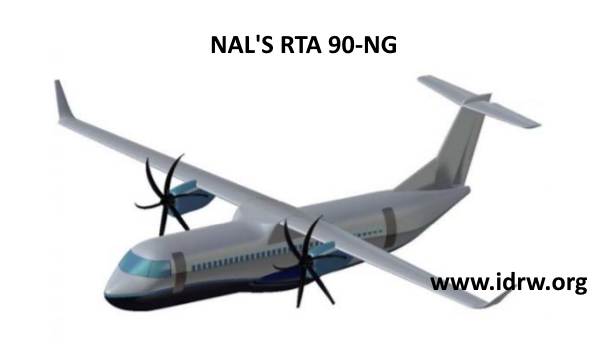 India is working on developing its 90-seater aircraft with National Aerospace Laboratories (NAL) being lead in charge of the program, details of the upcoming new Gen Regional Transport Aircraft (RTA 90-NG) were recently shared by the NAL and its road map to develop them. RTA 90-NG will have both turboprop and turbofan variant and NAL has proposed to construct a total of seven developmental models in a different configuration and different vendor engines to attract different civilian operators in India.

idrw.org has been informed that NAL also planned a Large Cargo Door Freighter variant to be used for Cargo service operators and even a military variant has been planned for troop transportation duties. NAL is reportedly in discussions with global engine manufacturers such as Pratt & Whitney of Canada and General Electric of US and avionics firms like Rockwell Collins and Diehl Aerospace for the supply of off the shelf critical components for the program.

India Specific Requirements for RTA will mean that it will compete with Bombardier developed Q400 Turboprop which was first 90?passenger model which according to Franco-Italian company is all set to grow further since more manufacturers are now proposing to develop their 90-Seat Turboprops for possible order over 1,340 such aircraft over the coming 20 years.

Q400 Turboprop already has cornered 600 confirmed orders from various operators worldwide and 50 coming from SpiceJet Limited (“SpiceJet”) based in India. According to NAL, the total requirement for RTA 90-NG will be around 250-300 units in the Indian market for both its Turboprop and Turbofan variant.

When asked by idrw.org of any proposal to develop a multi-mission aircraft (MMA) for maritime surveillance for Navy or Ramp variant for Cargo operations by the Air force based on the RTA 90-NG, we were told no such proposal exists but military variant based on armed forces requirement will be considered at a later stage but RTA 90-NG will be offered to Military for Troop Transport operations. NAL plans to have a first developmental model of the RTA 90-NG ready by 2025.