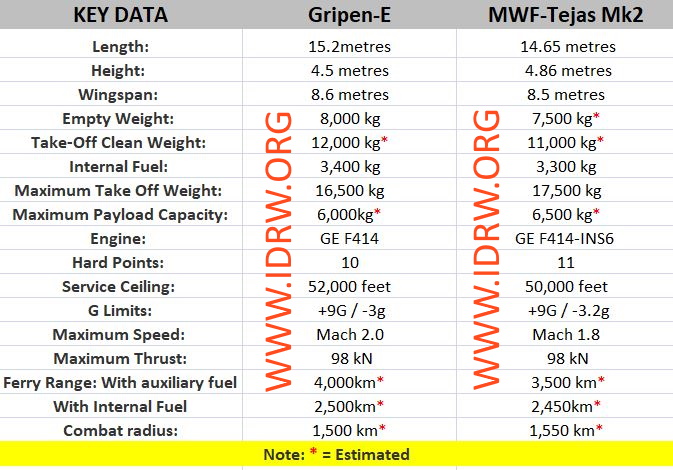 India and Sweden might be only countries left, who are still actively developing a Medium category 4.5+ Generation fighter aircraft in an era of 5th generation stealth fighter jets, while world also is moving towards the development of 6th generation fighter programs. Both Medium Weight Fighter (MWF)-Tejas Mk2 and Gripen E are near clear slate fighter designs based on the previous generation predecessors which will keep them active for decades to come with their respected airforce and it is fair to compare them both.

The above picture gives basic key data of both the aircraft when in direct comparison with each and other and further information in detail will be expanded.

Gripen E program already has got a head start and already three Gripen E testing aircraft have begun flight testing in June 2017 and November 2018, May 2019 respectively. Gripen E program has seen good progress and scheduled first deliveries to the export country will start from the end of 2019.

MWF-Tejas Mk2 program started in 2009 but has gone through two specification revisions since then, but present Air Staff requirement was issued somewhere in 2015 and a new design was completed in 2018 and first metal cutting activity will start by end of 2019 and first fully assembled MWF-Tejas Mk2 Testing aircraft will be ready in 2022 and the first flight has been planned for 2023.

MWF-Tejas Mk2 program schedules have not been revealed yet but with the production schedule of the program to begin from 2026 onwards, it is expected that IOC to be will be achieved at 2026 and FOC will become a continuous effort which will be achieved by 2029-30. Developers of MWF-Tejas Mk2 program seems to have taken a leaf of the Gripen E program and have planned test program where three pre-production aircraft which will take to air in within a short gap of 8-12 months intervals from 2023 onwards. 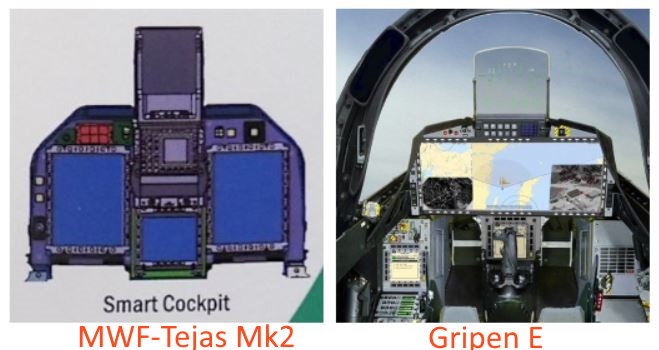 Gripen E will be equipped with a Wide Area Display (WAD) sporting a panoramic high-resolution screen (19 x 8 in). The pilot will provide data fusion on a large wide area display touchscreen, enabling fully-configurable information presentation and the potential for reconfiguration mid-mission by the press of a button. 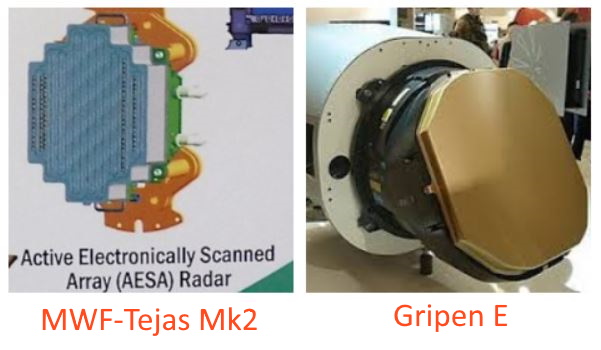 Gripen E will feature Selex ES-05 Raven AESA radar. while exact capabilities of radar are yet not available but promises have been made that it match Captor-E AESA FCR used in Eurofighter Typhoon in many respects or even surpass it in some ways.

MWF-Tejas Mk2 will feature an upgraded UTTAM AESA radar. while exact capabilities of radar are yet not available but promises have been made that it will surpass ELTA-EL-2052 AESA Fire control Radar which is to be used on Tejas Mk1A fighter jets. 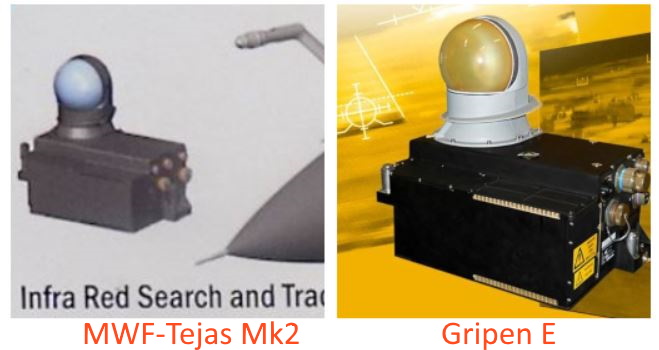 Gripen E features the Skyward-G infrared search and track (IRST) system which is similar to the Euro-fighters Pirate IRST since both have been developed by Finmeccanica. SkyWard has been designed and developed to satisfy the more demanding requirements of 5th generation fighter aircraft with an embedded solution.

Both Gripen E and MWF-Tejas Mk2 will be using Dual-Pylons in Air-superiority/ Combat Patrol Configurations. Multi-Mission Payload configuration can be seen below.

The Flyaway cost of MWF-Tejas Mk2 is yet to be disclosed by ADA and HAL but it is expected it will be Cheaper due to use of local content and it is estimated to be around $65- 70 million per unit. MWF-Tejas Mk2 will not have a twin-seater variant.

Gripen E already has received confirmed orders in principal for 60 units from Swedish Air force and 36 from the Brazilian air force but an additional follow on orders 36 jets is also likely to be inked by 2022. Gripen E has confirmed orders for 96 units and another 36 likely soon which means it will have a production run of at least 132 units. Gripen E already has been offered to several countries but no further confirm orders have been received yet.

MWF-Tejas Mk2 already has received confirmed orders in principal for 108 units from Indian Air force but the order is likely to swell to 200 units once the production is in full swing from 2030 onwards. MWF-Tejas Mk2 is yet to be offered to any countries yet but if India does manage to get export orders for the plane it will equal or surpass Gripen E orders in its production life time.

Gripen Maritime: A new generation carrier-based fighter for the future aircraft carrier has been proposed by the SAAB based on the Gripen-E fighter jet. Gripen Maritime is still at the concept stage and will be developed only if any country shows any interest in it.

MWF-Tejas Mk2 Rv2: Semi-Stealth with internal weapons bay has been proposed. DRDO Chief recently confirmed its development but it is still not clear if it will be based on baseline MWF-Tejas Mk2 design or will have major changes and modifications to it.

MWF-Tejas Mk2 UCAV: ADA is fiddling with an idea for developing unmanned combat aerial vehicle (UCAV) variant of either Tejas Mk1 or MWF-Tejas Mk2, it not clear if it will enter production or remain a test-bed for Ghatak Stealth UCAV.