Mr. Coupta, You committed Treason against your own Army and Country: General V.K. Singh

Recent exposes on a so-called story of an Indian Army coup attempt which was first reported in 2012 revealed that Top UPA minster’s in than Indian Government were actually behind the story which made headlines in national newspaper across India to divert public attention from the major corruption allegations which the government was facing even when there was no evidence or intelligence report from IB to back such claims.

General V.K. Singh who was back then Indian Army Chief in his recent Facebook post has blasted the current president of Editors Guild of India Shekhar Gupta who he refers to as Mr. Coupta for his tactical unholy nexus with the government ministers as nothing short of treason against its own country leading to irreversible damage to the reputation of the institution only to achieve his personal objectives.

Mr. Coupta is the nickname which netizens of India had given to Shekhar Gupta after his coup report was openly rubbished by then Raksha Mantri AK Antony in the parliament and several other reports by other media outlets had poked holes in the story.

General V.K. Singh already has requested his own government to carry out detail investigation and a thorough inquiry into the matter after recent revelations and regretted that Mr. Coupta who was instrumental in falsified news against Indian Army even today was not held accountable and urged actions needs to be taken to deter such fake news in future which can have serious implications on the country. 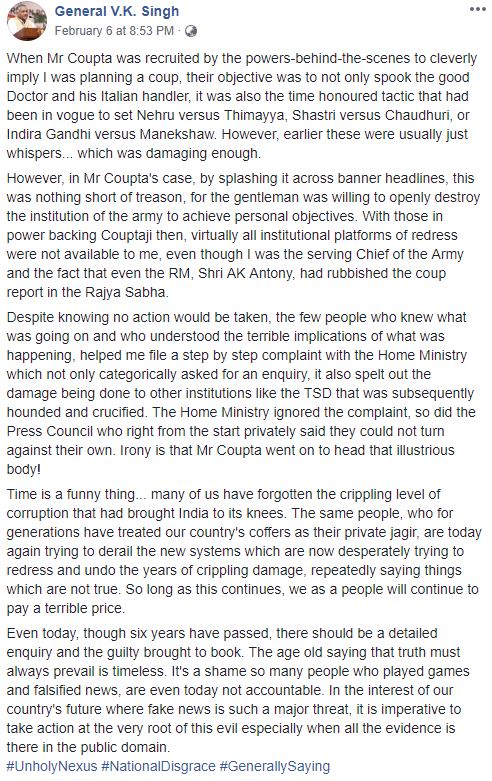 Article by PARESH NAIK /,  cannot be republished Partially or Full without consent from Writer or idrw.org