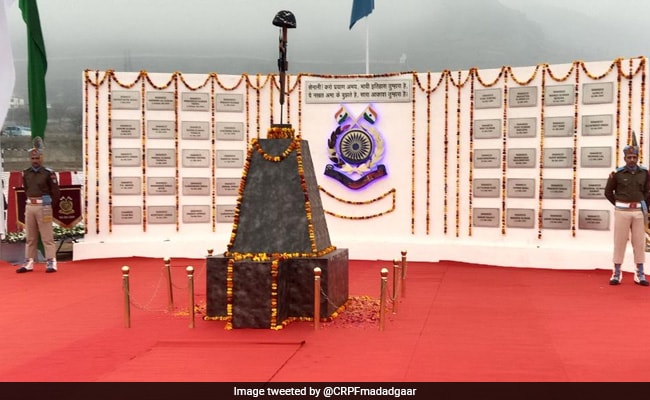 The 40 CRPF personnel killed in a terror attack in Pulwama a year ago were honoured on Friday with a memorial at the Lethpora camp of the force in a solemn and emotive ceremony. The memorial is inscribed with the names of all the 40 troopers along with their photographs and the motto of the Central Reserve Police Force — “Seva and Nishtha” (Service and Loyalty).

Maharashtra’s Umesh Gopinath, who undertook a 61,000 km journey to meet the families of the 40 families, collected soil from their homes in an urn and presented it to the CRPF during the ceremony. The Lethpora camp is right next to the place where Jaish-e-Mohammed terrorist Adeel Ahmed Dar drove a jeep laden with explosives into a convoy of vehicles carrying security personnel on the Jammu-Srinagar highway at Lethpora in Pulwama in the Kashmir Valley.

Almost all the conspirators behind the attack last year have since been killed. The last one, Qari Yasir, the self-styled chief of the Jaish-e-Mohammad terror group, was killed last month.

“We fight with extra vigour during an encounter with terrorists and that is why we were able to eliminate the Jaish-e-Mohammed commanders immediately after the attack on our jawans,” said CRPF Additional Director General Zulfikar Hassan.

He laid the wreath for the jawans at the memorial constructed by the CRPF at the training facility.

Mr Hassan expressed satisfaction over the ongoing probe by the National Investigation Agency and said no stone has been left unturned to take care of the martyrs’ families.

While he refused to spell out the precautions being taken during troop movements following the February 14, 2019 attack, officials in the security establishment said the movement of troops is now done in coordination with other security forces and the Army.

There was no movement of security forces convoys on the highway on Friday as there were intelligence inputs that militants might carry out symbolic attacks to mark the anniversary of last year’s attack.

“We are following standard operating procedures in letter and spirit to ensure that something like last year is not repeated. People have been cooperative in this regard,” a CRPF jawan said.

Guarding the very spot where the explosives laden car had blown up the bus carrying the CRPF personnel, he said he had been on duty since daybreak to ensure the function passed off without incident.

Since the attack last year, the Ministry of Home Affairs had allowed the CRPF to carry its troops by air to avoid the possibility of any such attack.