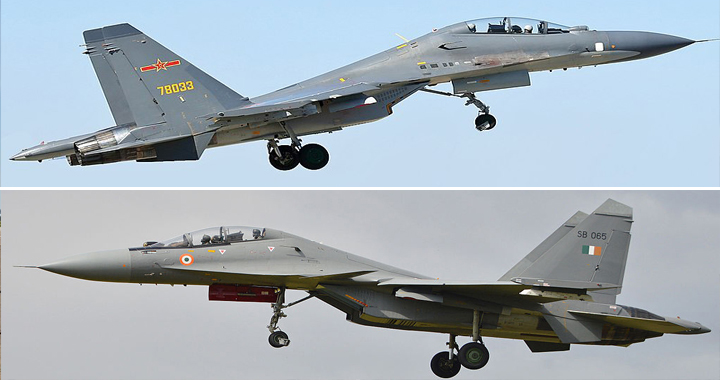 China’s new Shenyang J-16 multirole fighter jet which is based on Russian Su-30 Flanker-C multirole fighter has been gaining traction with the People’s Liberation Army Air Force, or PLAAF of late and production activity indicates that jet which was first introduced in 2014 as seen fast track production of this type and even quieter induction in PLAAF while Worlds focus remains on Chinese 5th Generation fighter jet programs.

For long, Indian defense analysts have dismissed PLAAF’s Su-27 and their copies J-11 as nothing but inferior and also took dig at the Su-30MK supplied to PLAAF by Russia which is heavily downgraded export model which is technologically not comparable with the IAF’s Su-30MKI fleet which due to its Indo-Western equipment had edge over PLAAF’s Original and Copied Flankers until J-16 came along with much superior spec sheet at least on the paper.

Unlike Su-27 and its copies J-11, J-16 is configured for both air-to-air and air-to-ground missions with its multi-mode AESA radar. J-16 is powered by the Chinese WS-10 Taihang turbofan engine which is not so reliable like the Russian AL-31F engines, but they can generate the same levels of thrust and locally produced which means lower ownership and operating cost for the PLAAF. China’s experience in the development of J-11 Air frame and its poor tries to incorporate local technology in an illegally manufactured jet has allowed them to develop J-16 with many improvements that were found lacking in J-11.

J-16 are not only younger than Su-30MKI but also incorporate newer technologies as seen with the introduction of composite air-frames, AESA Radar, Missile Warning System (MAWS), Radar Warning Receiver (RWR). J-16 has no edge over Su-30MKI at least in terms of Avionics since Chinese AESA Radar is not superior to the PESA Radar of the Su-30MKIs since both have the same level of search and track range and are still very much can do the same level tracking and detection but worry could be that Russians have supplied Chinese with a small fleet of Su-35 fighter jets which Chinese obviously will reverse engineer to incorporate some of this features in the J-16 or go head and introduce Chinese copy of the Su-35 in near future.

Su-30MKI still enjoys a reliable AL-31F engine with Thrust Vectoring Nozzles and Indo-Israeli avionics with French systems but Chinese by various improvements are trying to bring parity if not edge over IAF’s Su-30MKI fleet which should ring some alarm bells in HQ of IAF. Indo-Russian talks over upgrading Su-30MKI has been undergoing on for a long time now and but little has happened on the ground. Indian defense analysts have been urging Public-Private sector companies to come up with local modernization plans for the Su-30MKI fleet but that has not happened yet. While IAF has placed orders for 12 more Su-30MKI with HAL off late, we have to remember that current technology of the Su-30MKI was defined and is based on the technology which was developed in 1997-98 and it’s over 20 years old now and fast approaching obsolescence levels and its time we do some catch-up of over own.