From Ghost F-16 to Jammed Phalcon AWACS, Pakistani coming up with bizarre theories to deny the loss of their F-16 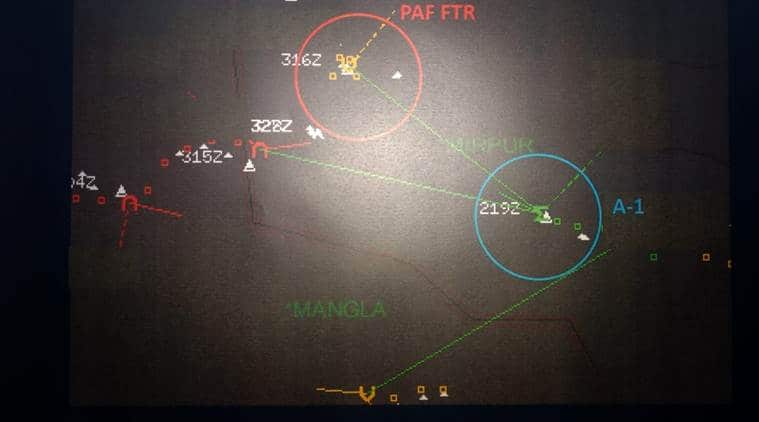 IAF recently showed evidence in Radar Pictures of formation of 3 F-16 against one Mig-21 in aerial battle which took place in the month of February where a Mig-21Bis of Indian Air Force shot down a Pakistani F-16 before it was shot down by Second F-16 later both inside Pakistan occupied Kashmir. Phalcon airborne warning and control system (AWACS) A-50EI aircraft, was airborne when close to four F-16 breached LOC and nearly 24 Pakistani jets were in the vicinity when the operations were launched and the whole sequence of events was recorded by the powerful EL/W-2090 radar system developed by Israel Aerospace Industries (IAI) and Elta Electronics Industries of Israel.

In the first series of evidence showcased by IAF were the images shown above, IAF also claimed it has further evidence of voice interceptions on the ground and in the air which confirms that one aircraft presumably an F-16 was shot down and the event was recorded by Phalcon AWACS which have designed and developed by Israel which nearly operates 200 F-16s in its own fleet and have helped India build library of Radar signature of F-16 database, making it very difficult for Pakistani F-16 to go undetected over Indian airspace but that evidence was not enough for some armchair Pakistani defense analysts who were quick to dismiss them and instead came up with new theories which are even more bizarre than claims of captured Israeli Pilot and JF-17 taking down Su-30

Some of the Counter theories put up by Pakistani defense analysts

Ghost F-16: Three F-16 caught on Phalcon AWACS were actually Ghost aircraft which were projected by a super secret decoying radar system which fooled Indian Mig-21 pilot to chase it only to be shot down by JF-17 which were flying in close vicinity.

Debunked: Due to lack of Radar lock from R-77 BVRAAM, Indian Mig-21 selected R-73 and chased F-16 inside LOC and managed to be as close as 7-8 km from first F-16 before he fired an R-73 Within visual range missile. At such height, it is possible to spot aircraft at that distance especially in a morning raid when weather is clear. Radar picture also proved that JF-17 were flying North of the scene of action and where nowhere in the picture even if they were armed with SD-10 BVRAAMs to claim Mig-21 kill which clearly now seems to be propaganda used by ISPR to hide the use of F-16s which failed miserably.

Blind-spot of AWACS : F-16 going missing in the second picture which was just 8 seconds apart was called as blind spot error which Phalcon AWACS could not record due to change in aircraft position which resulted in the blind spot where the radar couldn’t see the aircraft

Debunked: Phalcon AWACS uses an EL/W-2090 active electronically scanned array (AESA), an active phased array radar which doesn’t require physically rotating rotodome instead allowing it uses a beam to be electronically steered 360 degrees no matter which is aircraft’s position even if there is a sudden shift in attitude or change of flight pattern. AESA radars have very short scanning rates, which makes them difficult to detect and jam and nearly impossible for a jet to disappear from the radar even when it is performing high maneuvers.

Jammed Phalcon: Second theory is that Pakistani F-16 using their Jamming pod was able to jam powerful radars of Phalcon AWACS that the operators were guiding IAF fighters all over the airspace and even closer to the Pakistani side of Kashmir for an easy kill of Mig-21 and Sukhoi-30.

Debunked: Phalcon AWACS getting jammed by a Jamming pod is not just laughable but also shows how little they actually know about the capabilities of the Radar which have multiple bands of range and have a high resistance to jamming from jammer pods carried on by the jets. Two Su-30s were also well out of range of all F-16s which fired their AMRAAMs to score an actual kill and as per IAF, PAF F-16 pilots where counting on their luck then their abilities to score an Su-30 since they fired most of the missiles in its longest range which hints that it had to be fired only in manual mode after missile had not given them firing clearance.

Debunked: PAF were operating their Saab 340 AEW&C which has a side-looking radar with reported coverage of nearly 300 km and according to positions over which Sukhoi-30 were it was nearly impossible for them to get them in their radar coverage since it was flying well within its own airspace and furthest were the Su-30 positioned to protect some key military infrastructures . Su-30 never came close to LOC for their F-16 to get a clean shot nor missiles which were fired with manual override came anywhere close to the aircraft. If Erieye AEW&C system had seen Su-30 going down then evidence could have been out much earlier since it was much bigger kill then old Mig-21 which strangely never happened and will never happen since same armchair Pakistani defense analysts are also claimed that PAF will not realize them so that not to further humiliate IAF, which is laughable and officially PAF has never claimed it has any evidence, so PAF may make many patches of Su-30 Kills out know one is going to believe them .