Dhruvastra or Helina? The catch is the new jet vane control system (JVC) 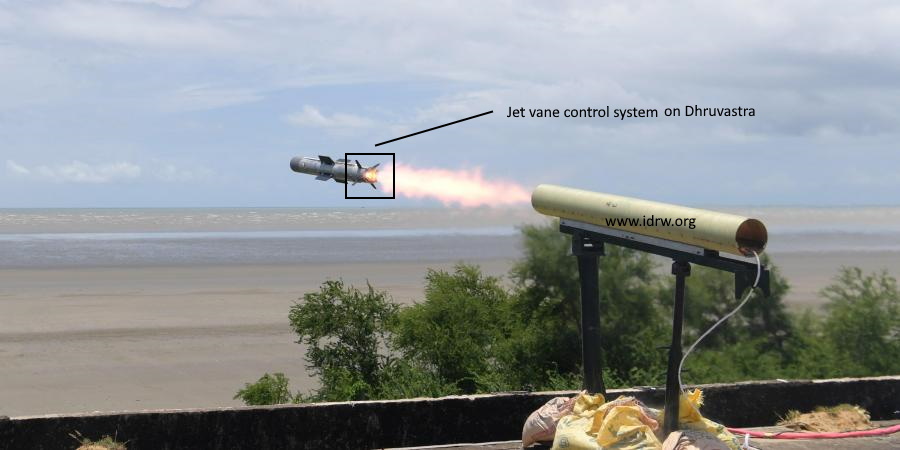 Dhruvastra anti-tank guided missile was tested in direct and top attack mode at ITR Balasore (Odisha). Dhruvastra has been called a variant of HELINA anti-tank guided missile (ATGM) which previously has been tested from the ALH Rudra platform to its maximum range capability of 7.0 km in Lock On Before Launch (LOBL) mode, so why did Dhruvastra was test-fired from a ground-based launcher is the obvious question if in previous tests it was fired from Helicopter? , well the answer lies in some design changes which the missile has gone through and one that can be confirmed in visuals is the use of jet vane control system (JVC) instead of the flexible thrust control system (TVC) seen previously in HELINA, which required re-verification of in-flight performance.

A jet vane control system for a missile is a system which is usually used due to its compact, rugged, lightweight factors but also since it provides very quick pitch over and roll control during launch and especially comes in handy in the top attack mode where it requires the missile to climb sharply after launch and cruise at high altitude then dive on the top of the target.

As seen in the picture, four jet vanes inside the exhaust move as the fins move and it seems to be adopted from the Man-Portable Anti-Tank Guided Missile (MPATGM) developed by the DRDO. a jet vane control system comes handy when the missile has to achieve missiles minimum range effectively in the process after launch before it reaches a higher speed. As seen in the two videos of the trials, it was done to test the missiles minimum range rather than its maximum range which already has been demonstrated previously by HELINA.

DRDO officials have confirmed that after few more rounds of trials from a Ground-based launcher, next will be testing from the ALH Rudra platform.