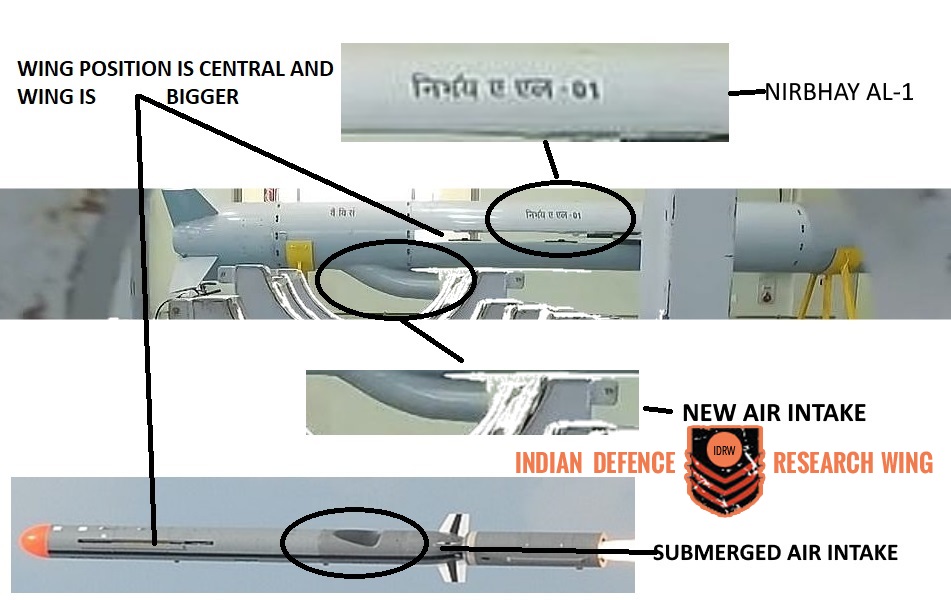 Nirbhay AL-1 (Air Launched) was spotted at Bengaluru-based Aeronautical Development Establishment (ADE) complex in a video interview conducted by Defense correspondence Dr. Anantha Krishnan M. Stacked at a corner, Nirbhay AL-1 showed many of the design changes which is expected from an air-launched variant which has been developed from its Land-attack based variant.

As seen in the picture above, Nirbhay AL-1 features a new Air-intake so has to keep unobstructed airflow to its engine which will be ignited once it is jettisoned from its launch aircraft. Nirbhay AL-1 Air-intake is similar to most of the missile system which is used as Air Launched weapons platform and has given away its submerged Air-intake design seen in its Land-attack based variant.

Nirbhay AL-1 features a new wing position which is now moving more towards the center and will have a bigger wingspan to accommodate getting launched from aircraft mid-air. Nirbhay AL-1 will come minus its launch booster but will use the same pylon developed for Air launched variant of BrahMos-A.

ADE plans to conduct Captive trials followed by free fall trials to study and collect data from the Dummy before work can start on launch trials of the Nirbhay AL-1.