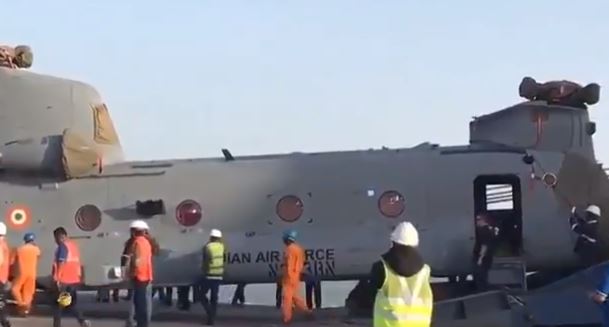 Boeing India has confirmed the arrival of the first batch of four Boeing CH-47F Chinook Helicopters for the Indian Air force at the Mudra Port in Gujrat and soon the helicopters will be assembled and will be ferried to Chandigarh airbase where it waits for formal induction into the airforce later in March.

Boeing had officially handed over the first Chinook transport helicopter to India at its facility in Philadelphia, US in the presence of Indian ambassador to US Harsh Shringla during the India-Chinook Transfer Ceremony.

As a part of a $3.1bn contract signed by India with Boeing in 2015 for the procurement of 22 AH-64E Apache attack, and 15 CH-47F(I) Chinook transport helicopters. India is expected to receive all of the AH-64E and CH-47F(I) helicopters this year.